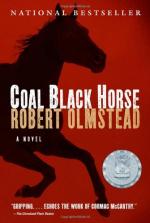 Robert Olmstead
This Study Guide consists of approximately 32 pages of chapter summaries, quotes, character analysis, themes, and more - everything you need to sharpen your knowledge of Coal Black Horse.

In May 1863, Robey Childs lives with his mother Hettie Childs in the countryside of what today is probably known as West Virginia. His father has gone away to war, enlisting in the Union Army. The Childs' farm is very remote and almost entirely isolated from the outside world. One night Hettie has a dream, or vision, in which she sees that Thomas Jackson has died and that her husband, Robey's father, must be located and brought home before July. Robey sets off along the path that his mother discloses, even though most people he encounters advise him otherwise. In the village nearby his home, Robey secures a coal black horse that will be his companion for most of the remainder of his journey.

Robey proceeds south to a pass, then east across the Allegheny mountains, and then north toward Gettysburg, Pennsylvania. As he travels he encounters the remains of past battles; dead men, rotting horses, and discarded materiel. One day he meets a louse-ridden runaway who shoots him in the head, grazing his skull, and steals the coal black horse. Robey recovers and continues his travel on stolen horses. He then meets a young girl in the company of an older couple and witnesses the older man, a preacher, rape the young woman. He determines he must not intervene because he must find his father. Shortly thereafter he is captured by Union forces who hold him briefly as a spy before releasing him. The Union forces forthwith are attacked and driven back and in the confusion Robey manages to recover the coal black horse.

Finally, Robey arrives at Gettysburg and witnesses the litter of war; the exact date is not given but it is already July; when Robey finds his father, he discovers his father has been shot through the face and head. Though conscious and articulate, his father is mortally wounded. Over the next three days Robey tends to his father and scavenges food and water from the environs, often running into various unsavory characters including two scavengers who are desecrating corpses and murdering the injured to steal gold dental fixtures and so forth. Robey in turn kills one of the scavengers and takes the loot from the other one. That night his father explains, or attempts to, the high purpose of the war. Robey listens but silently disagrees. When his father dies he buries him along with all of the battlefield loot and hundreds of letters he has gathered from the wounded and dying.

Robey then retrieves the girl, Rachel, and in her escape she stabs the minister with a pitchfork. The two teenagers then flee south, traveling mostly be night. They reach the Potomac River and cross over on the Union pontoon bridge. Returning home, Robey finds the village near his home burned and vacant. However, his mother is alive and the farm is well. Hettie tells Robey that Rachel is pregnant; although surprised he is not dismayed. Over the next few months Hettie battles sadness while Rachel battles madness. Robey returns to work the fields and watch for the men that he is sure will come. When the remaining scavenger returns, Robey hills him with a rifle shot. Later, when the Reverend comes, Robey also kills him. That night Rachel delivers twins and tries to kill them by throwing them into a mountain creek. Robey rescues the infants and the new family, atypical in many respects, gets off to a shaky start.