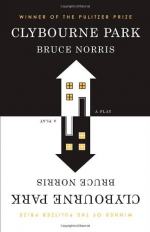 Bruce Norris
This Study Guide consists of approximately 30 pages of chapter summaries, quotes, character analysis, themes, and more - everything you need to sharpen your knowledge of Clybourne Park.

Clybourne Park is a play written by Bruce Norris. The first act takes place in 1959. Bev and housekeeper Francine are packing items while Russ eats ice cream. Bev takes a phone call from Karl, a concerned neighbor. Jim, a young minister, walks in and starts talking with Russ. He questions Russ's health and new office. Russ feels uncomfortable when Jim asks how he is doing personally and tries to engage him about his son. Russ uses foul language, which makes the situation tense. He heads upstairs, while Bev tells Jim that Russ uses dirty words and she does not want to be alone with him.

Karl and his wife Betsy arrive at the house. Russ wants to know what is going on because Francine and her husband Albert head upstairs. Karl is racist and is concerned about the new family that is moving in. He believes that they will not be able to fit into the community. Albert politely asks for help with the trunk, but no one hears him and the trunk crashes down the stairs. Russ becomes angry and tells them to leave it there as he goes down to the basement.

Jim and Karl ask inappropriate questions to Francine and point out differences between people. Russ comes back and calmly tells them that the house is sold. Betsy tries to figure out what is going on, but she is lost. Russ gets fed up and wants to punch Jim, who falls over a box and knocks down a lamp. Betsy leaves and Bev hides in the bathroom. Albert tries to calm Russ, but that only infuriates him. Francine is angered by Albert's involvement, they squabble, and she rushes outside. Jim and Karl leave after continuing to upset Russ. Bev tries to pay Albert, but he refuses and leaves. The act ends with Russ shouting the capital of Mongolia from their previous conversation.

The second act takes place fifty years later in 2009, in the same house. Lindsey and Steve bought it and want to tear it down, which has created problems. Kathy, their lawyer, helps to define vocabulary. Tom leads the group in their discussions. Kevin and Lena are neighbors representing the Home Owner's Association. The group is not able to stay on task due to interruptions. Lena feels that she has important information to share about the historical connections with the community. Her great aunt lived in the Clybourne Street house after the Stollers, from Act 1. Kathy is trying to help her Caucasian friends who bought the house. Her parents are Betsy and Karl, who tried to dissuade the Stollers from letting African Americans move into it.

Kevin and Lena share information about what happened in the house more than 50 years ago. Lindsey is not able to handle the fact that Kenneth hung himself in her new house. Inappropriate jokes are told and some are offended. Not a lot of business is conducted and the couples get upset with their spouses. The play concludes with a flashback to Act 1 where Kenneth writes a letter and Bev expresses hope for the future.

More summaries and resources for teaching or studying Clybourne Park: A Play.