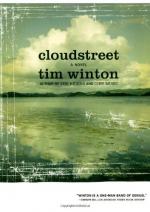 Tim Winton
This Study Guide consists of approximately 43 pages of chapter summaries, quotes, character analysis, themes, and more - everything you need to sharpen your knowledge of Cloudstreet.

This detailed literature summary also contains Topics for Discussion and a Free Quiz on Cloudstreet by Tim Winton.

Tim Winton's Cloudstreet is set principally in a large, rundown house at Number One Cloud Street in Perth, Western Australia. In 1944, the Pickles family of Geraldton, on the coast north of Perth, inherit the house and move there. Shortly afterward, the impoverished family subdivides the backyard and rents out half of the house to the Lamb family, who have arrived from the coastal town of Margaret River, south of Perth. Both families are large and poor, but the Lambs are energetic and resourceful, while the Pickles are generally lazy and defeated. The Lambs, led by their strong matriarch, Oriel, open a grocery store in the bottom of the house, which proves to be so popular in the neighborhood that Number One Cloud Street becomes known by one word, Cloudstreet. The store also dominates the uneasy relationship between the two families. The Lambs pay their rent from the proceeds, which play a large part in keeping the Pickles financially afloat. The Lambs are raucous, hard-working, and God-fearing, whereas the Pickles are more quiet, dysfunctional, and helpless. Oriel and her husband, Lester, work as a team, even though she considers him to be foolish and eventually moves herself into a tent in the backyard, where she lives throughout much of the story, which spans twenty years. Sam Pickles and his wife Dolly have a strong sexual attraction, but Dolly is unfaithful and an alcoholic, while Sam is an inveterate gambler who cannot be trusted with money.

Among the children of the two families, the most important characters are Rose Pickles and two Lamb brothers, Fish and Quick. Rose, who has two brothers, is the only daughter in her family. She is the sensible child, bright and very aware of her parents' shortcomings. Fish and Quick have a younger brother and three sisters. Fish is the funny, smart one, beloved by all, until he almost drowns in a fishing accident early in the book, and reverts to the mentality of a small boy. Quick blames himself and struggles with depression throughout the book. Fish's accident is a central occurrence in the life of the Lamb family, just as Dolly's drinking and Sam's gambling dominate the Pickles family. As the two families struggle through life over two decades, Tim Winton chronicles the changes of the children and their parents, interweaving their stories around a theme that explores the nature of good and bad luck and self-determination and inserting spiritual or ghost-like elements in the tale that reflect on this theme. Full of sadness and hilarity, despair and acceptance, and rich with Australian jargon, this novel is a memorable portrait of the rough-and-tumble rural life of that nation from the World War II years until the early 1960s.