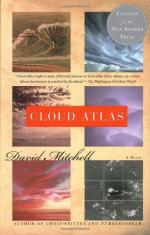 This detailed literature summary also contains Topics for Discussion and a Free Quiz on Cloud Atlas by David Mitchell (author).

Cloud Atlas by David Mitchell is a set of six interconnected tales that span generations and continents to illustrate the basic human condition. The novel begins and returns at the end to the mid-nineteenth century, giving the reader a warning glimpse at the future of our society along the journey.

The first tale, "The Pacific Journal of Adam Ewing," takes place in the mid-1800s in the South Pacific. Adam Ewing, a notary from California, is traveling back home from Australia after seeking the beneficiary of a will. He meets and befriends an English doctor, Henry Goose, while marooned briefly on the Chatham Islands during ship repairs. Goose ends up continuing the journey with Ewing and the ship.

When the ship sails, Ewing finds that an island native, Autua, has stowed away in his cabin. Autua presents himself to the captain, who reluctantly takes him on as part of the crew in exchange for his passage. Dr. Goose is persuaded to tend to the Captain, who has an undisclosed malady, as well as Ewing, who has been suffering from something he calls his "Ailment." In attempting to "cure" Ewing, Goose reveals himself to be a fraud and a con man and almost kills Ewing.

The second tale is one of a ne'er-do-well young, English music student, Robert Frobisher. Frobisher has been disowned by his aristocratic family, kicked out of the university, and pursued by creditors. He devises a plan to hide in Belgium as the musical aide to a venerable and ailing composer, Vyvyan Ayrs, at Ayrs' Chateau Zedelghem. His proposal is accepted, and he spends several months with Ayrs, his wife Jocasta, and their daughter Eva. He relates his experiences to his friend, Sixsmith, in a series of letters.

"Half-Lives: The First Luisa Rey Mystery" is structured as a pulp mystery novel. It tells the tale of a young magazine reporter, who happens on a corporate deception of huge - and dangerous - proportion. This deception is being exposed by Rufus Sixsmith, Frobisher's friend from the previous chapter, now a renowned physicist.

"The Ghastly Ordeal of Timothy Cavendish" brings the reader to present-day London. There, an elderly, vanity publisher lucks into a bestselling novel. However, when the royalties start coming in, he is visited by the author's rough relatives, demanding their share of the profits. Cavendish escapes to a "hotel" north of London, which turns out to be a "no escape" asylum for the elderly. After several weeks, Cavendish barely gets away and pens a screenplay of his adventures, the basis of this chapter.

"An Orison of Sonmi-451" transports the reader to a futuristic world, run by large corporations. It's a world where clones (fabricants) are made to perform a wide range of service positions. One such fabricant, Sonmi-451, "ascends." That is, she is able to learn and to retain knowledge. She is used by various groups for their own ends, to Sonmi's ultimate detriment.

The final story in Cloud Atlas takes place in a post-apocolypsal world, where mankind has reverted to small tribes, eking out a basic survival. In this society, knowledge and language are limited; lifespans are short and babies are often born dead or deformed. The hero of this story, Zachry, escapes the chaos and death on his island with the help of his friend from a distant land, Meronym.