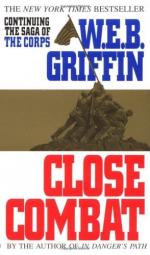 This detailed literature summary also contains Topics for Discussion and a Free Quiz on Close Combat by W. E. B. Griffin.

Close Combat by W.E.B. Griffin is one in a series of books on World War II. This book is basically centered on Guadalcanal and events in the lives of the people who served there and elsewhere in the war effort. The book opens with a group of pilots taking off from Henderson Field on Guadalcanal. The characters are introduced and followed throughout the book.

The book is basically a story of the people involved in the war effort. Pickering, known as Pick, Galloway and Dunn are pilots flying planes that are crafted piecemeal from parts from inoperative planes. The mechanic in charge of keeping the planes operational is Oblensky. The highest ranking officer on the island is Major General Vandegrift Major Jack Stecker commands a land unit on the island.

There is a group of war correspondents that were sent to the area to cover the invasions of Guadalcanal, Gavutu and Tagli, under the command of Major Jake Dillon what had been a Hollywood press agent before the war. Dillon has left the island and nineteen year old Bobby Easterbrook is the only photojournalist still active. The others have been inured or killed. Easterbook continues taking pictures.

Fleming Pickering is the father of Pick and a special envoy to Secretary of the Navy Knox. He is involved with intelligence analysis in the Pacific and works closely with General Douglas MacArthur and President Roosevelt. He has a special team to analyze the MAGIC interceptions of Japanese radio messages.

Galloway, Dunn and Pick are sent to Hawaii for refitting. While there, Jake Dillon decides they would be useful for his war bond tour, and has them assigned to him. He also brings Easterbrook home for work in the tour. The tour brings them into contact with politicians and movie stars. Easterbrook feels that he is dreaming when he finds himself staying at a Malibu beach house, having an affair with a beautiful woman and mixing with movie stars.

The reader watches as rules are bent and strings are pulled as people like Jake and Fleming Pickering secure the people and supplies that they need to do the assignments they are given. Jake manages to get McCoy, who was in the Brig and slated for a court martial, free to receive the Medal of Honor and to go on the war bonds tour.

Griffin basically portrays the human aspect of the war as the reader follows the lives of the main characters on their various assignments. The book is fast and easy to read, making it very enjoyable for the reader.