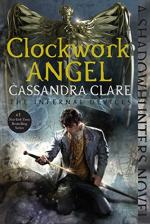 Clare, Cassandra
This Study Guide consists of approximately 58 pages of chapter summaries, quotes, character analysis, themes, and more - everything you need to sharpen your knowledge of Clockwork Angel.

This detailed literature summary also contains Quotes and a Free Quiz on Clockwork Angel (The Infernal Devices) by Clare, Cassandra .

Clockwork Angel, by Cassandra Clare, is the first novel in the author's trilogy, The Infernal Devices. The book opens as Tessa Gray arrives in London aboard a ship. She is a 16-year-old orphan. Her aunt has recently died, leaving Tessa penniless and alone. Nate is the only family that Tessa has left. It is understandable that Tessa is hoping that her brother Nate will be there to meet her. However, instead of Nate, a strange man greets her at the dock and directs her to two women – Mrs. Dark and Mrs. Black. The two have a letter from Nate, saying she should go with them. Tessa sees no alternative and soon finds herself imprisoned by the two women. Mrs. Dark and Mrs Black teach her to harness a power she never knew she had before the women told her. The power allows her to change shape. By holding something that belongs to someone else, Tessa can become that person. She can see and relive the moment of that person's death. Tessa learns she is being groomed to become the bride of the Magister, though she does not know anything about Magister.

Will Herondale and his group of Shadowhunters live at the London Institute, and they are tracking a killer. Their pursuit of the killer leads them to the home of Mrs. Dark and Mrs. Black. Once there, they rescue Tessa. Soon after, Tessa learns that there are many evil and demonic forces in the world and the Shadowhunters are an elite fighting team. Created by an angel, the group's mission is to keep the human world safe from the harmful forces. Ironically,Tessa is a shape shifter. As such, she should have a demonic mark. However, she does not have one.

Recovering from the horrors of her imprisonment, Tessa is very worried about Nate. The Shadowhunters promise to help Tessa learn exactly what she is and the fate of her brother. They seek out a man named Mortmain, who had employed Nate upon Nate's arrival in England. Initially, the Shadowhunters believe that Mortmain has been only dabbling in the occult. Soon they learn that he is the Magister. The Magister manipulates information that sends the Shadowhunters off to battle a vampire named Alexei de Quincey. It is there that Tessa rescues Nate.

Nate recovers at the Institute for several days. Soon after he is well, most of the Shadowhunters leave for another battle with de Quincey and his clan. Mortmain arrives and tells Will that Mrs. Dark and Mrs. Black are creating the power for a clockwork army, hundreds of robotic soldiers who could wipe out the Shadowhunters. Will and another young Shadowhunter named Jem leave the Institute in an effort to stop the Dark Sisters. Will and Jem soon figure out that Mortmain's story was a ruse to get them out of the Institute.

The Institute is protected so that only someone with Shadowhunter blood can open the door. One of the clockwork soldiers has Jem's blood on his hand, which allows him to open the door for other soldiers, who are led by Mortmain. Tessa and Nate are inside, and Nate quickly makes it clear that he has willingly handed Tessa over to Mortmain. The soldiers kill two servants, but Tessa escapes to the sanctuary. Mortmain follows and demands that Tessa marry him. Tessa prods Mortmain for information about her background. Mortmain says Tessa's biological parents were involved in the occult group called the Pandemonium Club and her father was a demon. Mortmain tries to take her prisoner, but Tessa threatens to kill herself with a knife. Tessa manages to turn her back and shape shifts to a woman who died of a gunshot wound. As she changes, the woman's blood pours out, covering Tessa's clothing so that Mortmain believes Tessa has used the knife to kill herself.

Will rushes in and Mortmain leaves, taking the other item he'd come for – a box that contained the trapped souls of demons. Will hurries to Tessa's side and is relieved to find she is not hurt. Tessa believes she and Will have a connection, but Will immediately shuts down and refuses to spend any time with her over the coming days. The head of the Institute, Charlotte Branwell, invites Tessa to remain while they search for answers about her past. Tessa is happy to accept, but she does not understand what has happened between her and Will. As the novel comes to a close, Will goes to a local warlock, Magnus Bane, saying he is in desperate need of help. He says that Magnus is the only one who can help him.

More summaries and resources for teaching or studying Clockwork Angel (The Infernal Devices).