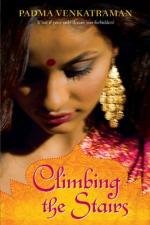 Climbing the Stairs Topics for Discussion

How is the chess game between Kitta and Vidya in The Chess Game symbolic of their differences about the war and nonviolence? Who is teaching who during the game? Who teaches who during the war?

1) What are his beliefs?

3) How does appa treat their servants?

4) What does appa think about being Brahmin?

5) How has being Brahmin helped appa?

6) How has being Brahmin hurt him?

How are Jews, like Rifka, treated in India? What Hindu beliefs may contribute to this treatment? How are Jews begin treated in the rest of the world during this time?

Compare and contrast the treatment of Jews and Indians...