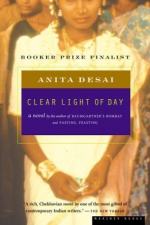 Anita Desai
This Study Guide consists of approximately 46 pages of chapter summaries, quotes, character analysis, themes, and more - everything you need to sharpen your knowledge of Clear Light of Day.

This detailed literature summary also contains Topics for Discussion and a Free Quiz on Clear Light of Day by Anita Desai.

Part 1 focuses primarily on Tara. Having just arrived to visit her home and family, she takes in her surroundings, and the reader is introduced to the house and family members primarily through her eyes.

Part 2 centers primarily on Bim, and goes back in time to when the siblings were children. The reader is given a view of Bim that is very different from the woman who is introduced in Part 1. Bim is forced to nurse her sick brother to health and to care for her sick aunt, as well as caring for Baba, who will always need to be cared for. That summer, the children's mother falls ill and dies, and their father dies soon after, in a strange car accident. Bim is left as head of the household and accepts the responsibility she has been dealt.

Part 3 goes back even farther in time, to when the children are even younger. Bim and Tara's experiences in school are contrasted: Bim loves school and becomes head girl while Tara hates school and everything about it. One afternoon, on a picnic, Bim is attacked by a swarm of bees and Tara, who witnesses this in horror, is unable to help her sister. The guilt she experiences from the incident stays with her. At the end of the section, Tara shows her approval of their neighbors, the Misra girls, who marry early without attending college. Bim vows never to marry and plans to remain at home with her aunt and brother, attend college, teach, and remain completely independent.

Part 4, the final section of the novel, goes forward again in time to Tara's visit to her childhood home. Bim and Tara converse a great deal about their brother, Raja. Although Bim has seemed to resent her brother up until this point, the resentment slowly fades and she convinces herself to accept her brother and his shortcomings. Tara expresses her concern for Bim and, before leaving, pours out her feelings of guilt for leaving Bim with her aunt and brother when she left the house to marry Bakul. Bim looks into her sister's eyes and recognizes her distress. The two sisters grow very close in this moment, as Bim realizes they are not so different after all.

More summaries and resources for teaching or studying Clear Light of Day.