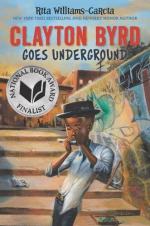 Related Topics
One Crazy Summer
A Sitting in St. James

Rita Williams-Garcia
This Study Guide consists of approximately 55 pages of chapter summaries, quotes, character analysis, themes, and more - everything you need to sharpen your knowledge of Clayton Byrd Goes Underground.

The following version was used to make this guide: Williams-Garcia, Rita. Clayton Byrd Goes Underground. New York: Harper Collins, 2017. The novel is 29 chapters long but for the purposes of this guide is broken into 5 sections, each section is 5 or more chapters long. The story is told from Clayton’s third person’s perspective, with a few chapters told from his mother’s perspective. The story mostly centers around a day in Clayton’s life when he decides to run away from home.

The novel opens with the chapter “When, Cool Papa, When” (1). The bluesmen sit together in Washington Square Park playing the blues. Clayton plays the harmonica, while his grandfather Cool Papa plays the electric guitar, that he calls Wah-Wah Nita. He repeatedly asks his grandfather when he can have a solo, but he keeps telling him not yet. In the next chapter, “Midnight Jam,” Cool Papa and Clayton eat dinner, play some music, and they both fall asleep as Cool Papa reads to Clayton. In the chapter “Lost at Sea” Ms. Byrd returns home from work, and in “A Small Wind Dance” Clayton wakes up and realizes his grandfather has died. In the chapter “The Sky is Crying” Clayton and Ms. Byrd attend Cool Papa’s funeral. Ms. Byrd does not allow any blues music at all during the service, though the Bluesmen get up and sing the Blues song “The Sky is Crying” (25). In the chapter “Takers” Ms. Byrd sells all of Cool Papas’ things in a yard sale, and Clayton is furious, and he takes Cool Papa’s porkpie hat and hides it. In the chapter “Empty Room” Clayton visits Cool Papa’s lonely empty room, and joins his mother at dinner, though he is surly and upset with her.

In “The Four Corners of the World” Clayton returns to school and the teacher announces they will read the book The Four Corners of the World, and when they start reading Clayton falls asleep in class. In “Blues Day” Clayton falls asleep again in class, and his teacher gives him a note. In “House of God” Clayton stays home from school and goes to the church to talk with Pastor Early. He does not listen to the Pastor, and instead he plays with a Rubik’s cube. In “Stay Awake” Clayton falls asleep again in class, though he tries as hard as he can to stay awake. In “Scolding Tones” Clayton’s mother comes to school to take him home, and scolds him the whole way. Once home, she takes his blues harp.

In “The Plan,” Clayton pretends to go to school, but goes home and packs, grabs the porkpie hat, takes back his blues harp, and smashes his mother’s angel salt shaker. In “Clayton Byrd Goes Underground” Clayton gets on the subway and in “Every Rider Clap Your Hands” he meets the Beat Boys. They start a song on the subway and Clayton joins. In “Show Your Love” they keep performing and ask for money, a stranger giving Clayton five dollars. In “Beat Boys” they all leave the train and the boys take Clayton’s money, blues harp, and hat - demanding he join them. In “The Opposite of a Bluesman” Clayton keeps playing with the Beat Boys, though the train is packed, and seeing a police officer they run away. Clayton just follows Train Ear so he can get his grandfather’s hat back.

In “Six Rings,” Clayton’s father calls his mother at work and she says they are doing fine. In “Chasing the Beats” Clayton follows the Beat Boys off the train and loses his blues harp on the tracks but picks it up right before a train almost hits him. In “What He Told Himself” the Beat Boys discuss where to go, but tease Clayton’s suggestions and refuse to give him his hat back, so Clayton walks away. In “In the Midst of the Swarm” and “In Search of the Bluesmen” Clayton rides the train downtown, and he asks someone in Washington Square Park where the Bluesmen are, and he tells him they will not return until May. In “Going Down” Clayton rides the train again to go home, runs into the Beat Boys, and is arrested along with them.

In “Without A Warning” the cops arrest the Beat Boys and take them into the station. In “Guardian Angel” Clayton’s mother picks him up at the station, upset and crying. In “Ms. Byrd and Mr. Miller” Clayton’s father picks him up and talks to Ms. Byrd about how Clayton is hurt. In “Believe” Clayton’s father talks to Clayton about his actions, and about his mother. In the final chapter, “Sometimes A Ghost Note,” Clayton is back in his house and back at school. He also finds the electric guitar his grandfather called “Wah-Wah Nita” back in his grandfather’s chair.