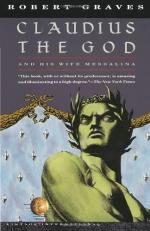 Claudius the God and His Wife Messalina Summary & Study Guide

Robert Graves
This Study Guide consists of approximately 49 pages of chapter summaries, quotes, character analysis, themes, and more - everything you need to sharpen your knowledge of Claudius the God and His Wife Messalina.

Claudius the God and His Wife Messalina Summary & Study Guide includes comprehensive information and analysis to help you understand the book. This study guide contains the following sections:

This detailed literature summary also contains Topics for Discussion and a Free Quiz on Claudius the God and His Wife Messalina by Robert Graves.

Claudius the God and his Wife Messalina by Robert Graves is the sequel to I, Claudius. It is an autobiography accounting the actions and misfortunes of the Roman emperor, Claudius. Graves portrays Claudius as a sympathetic character rather than the bumbling idiot that he is seen as throughout history. Claudius the God and his Wife Messalina provides an insight into ancient Roman politics through a sympathetic character who makes many mistakes but never maliciously.

Tiberius Claudius Drusus Nero Germanius survives his relatives and is crowned emperor at fifty years old. His friend, Herod Agrippa, is sent to Rome when he is orphaned. Herod Agrippa is accused of plotting against Tiberius so he flees. He later returns to Rome and befriends Caligula. Caligula's coachman overhears a treasonous conversation that leads to Herod Agrippa's arrest. When Marco smothers Tiberius, Herod Agrippa is released and Caligula becomes emperor. Caligula goes crazy with his power and replaces statues of the gods with statues of himself. Caligula dies, and Claudius accedes to emperor. The Senate gathers and discusses restoring the Roman Republic. Claudius does not want to be emperor, but there is no one else to clean up the mess that Caligula left of Rome; he rules as the lesser of evils. After the Senate realizes that they cannot dissuade Claudius from ruling, they offer many signs of respect as means of an apology. Messalina, Claudius' wife, helps him choose ministers and advance security measures. Herod Agrippa's warning to be wary of assassins causes Claudius to avoid the Senate for a month. Claudius is not learned in the laws and makes many mistakes during his first year at court. All is quiet in Rome, and Rome's finances are secure.

A rebellion arises in Alexandria when the Greeks oppress the Jews. The Governor of Egypt appeals to Claudius who orders the release of all Jewish prisoners, restoring the peace. When Herod Agrippa departs, Claudius organizes a feast during which they reaffirm their friendship and promise to include personal letters with their official correspondence. Herod Agrippa offends Claudius when he advises him never to trust anyone. Claudius buys his former mistress, Calpurnia, a villa near Ostia, where she retires with her friend, Cleopatra. Claudius orders punitive campaigns against the Chattians and the Istaevonian raiders. He learns the whereabouts of the Eagle and has it retrieved from Germany. Messalina has two children, Drusus Germanicus and Octavia, within two years. Claudius considers the possibility of converting Ostia into a safe winter harbor to avoid famine. He also constructs aqueducts and orders a channel to be built to drain Fucine Lake. Because of Claudius' ill health, Herod Agrippa recommends that Claudius see a Greek doctor, Xenophon. Claudius learns from Marsus that Herod Agrippa is fortifying Jerusalem, causing Claudius to lose faith in his friend. Messalina asks to sleep in separate bedrooms in order to avoid another pregnancy; she moves to the New Palace and attempts to sleep with her mother's husband, Appius Silanus, resulting in his execution when he tries to assassinate Claudius. The Senate decides that they need a stronger emperor, and a rebellion ensues but is thwarted.

Claudius declares war against Britain. During the war, Claudius suspects Herod Agrippa of executing an uprising in the east. Claudius finds proof of Myron's fraud and has him executed the same day that Aulus summons Claudius to Britain. Claudius joins Aulus in London and inspires the troops with his speech. The Romans defeats the Britons at Weald Brook used the ruse of the Heron King, but Caractacus escapes. Claudius declares Caractacus' empire a Roman province under Aulus' government. Herod Agrippa's letter to Claudius convinces the emperor that his friend believes himself the Messiah. The Senate votes five honors for Claudius, but Claudius refuses to allow them to give Messalina the title of "Augusta". Claudius participates in the triumphal procession through the city. At Messalina's request, he commands Mnester to obey Messalina in everything. Claudius examines religions, banishing many Jews and arresting many Christians. Herod Agrippa plots against Rome, but when he reveals himself as the Messiah, he realizes his blasphemy and, though he repents, dies of Herod's Evil. Claudius adds three letters to the Roman alphabet, celebrates the Saecular Games, takes a census of Roman citizens, revives soothsaying, and passes many edicts. Caractacus is captured but sues for mercy and is released.

Messalina suggests a divorce in order to avoid a prophecy that ordains her husband's death within a month. Claudius agrees, and they choose Silius for her to marry. Calpurnia warns Claudius of a great danger to himself and Rome because Messalina and Silius plan to restore the Republic; she also informs him of Messalina's many infidelities. Claudius orders the arrest of the entire wedding party. Messalina pleads for her life, but Claudius realizes her manipulation and orders her death. Claudius learns that the Britons worship him as a god and is disconcerted with the knowledge. Claudius marries Agrippinilla as a matter of form but does not take her as a lover. He allows Agrippinilla to rule him because he is tired of being emperor. He adopts Lucius Domitius as Brittanicus' joint-heir and betrothes Octavia to Lucius Domitius. Claudius' engineers announce that the channel to drain Fucine Lake is completed, but it is not so. It will take another two years. Claudius predicts that he will not live to see it. He plans to send Brittanicus away, but Brittanicus refuses to hide from Lucius Domitius. Agrippinilla poisons Claudius, and Lucius Domitius reigns. Claudius ascends to Heaven where the gods vote against his deification. Mars drags Claudius to hell where Narcissus greets him and Caligula claims him as a slave. In 55 AD, Brittanicus is poisoned. Lucius Domitius has his mother killed and is killed himself in 68 AD. The next year is a year of anarchy and civil war; the Republic is never restored.

Claudius the God and His Wife Messalina from BookRags. (c)2022 BookRags, Inc. All rights reserved.