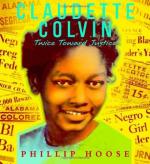 Phillip M Hoose
This Study Guide consists of approximately 25 pages of chapter summaries, quotes, character analysis, themes, and more - everything you need to sharpen your knowledge of Claudette Colvin.

This detailed literature summary also contains Topics for Discussion and a Free Quiz on Claudette Colvin: Twice Toward Justice by Phillip M Hoose.

Claudette Colvin: Twice toward Justice is the story of the early life of Claudette Colvin, a fifteen-year-old resident of Montgomery in 1955 who spontaneously refused to yield her seat to a white woman, which violated local law at the time. The importance of Claudette Colvin is that her actions preceded that of Rosa Parks's by nine months. Parks became a symbol of the Civil Rights movement in the 1960s and Claudette's story was hidden away, despite her importance in inspiring the Montgomery bus boycott and her participation in the Browder v. Gayle trial which declared Montgomery bus segregation laws unconstitutional.

The main point of the book is to tell Claudette's story and to subtly hold the '50s and '60s Civil Rights' leaders accountable for ignoring Claudette. At the time, she was considered an inappropriate face for the Civil Rights movement as she was a young, "emotional" unwed, pregnant mother. Given the stigma on unwed motherhood in the black community and behind, she was deemed unfit. The problem was that Claudette was then almost completely forgotten by the movement even long after its major successes. When she was young, no one helped her survive poverty or take care of her child. She was given almost no acknowledgment whatsoever. While some people spontaneously looked into her case in the '70s, '80s and '90s, Claudette was not officially recognized until the mid-2000s. In 2005, she spoke for the first time to Booker T. Washington high school students.

Colvin was born in 1939 to young parents but was left to be raised by her great-aunt and great-uncle. She lived in a small town outside of Montgomery. She was regarded as a smart and inquisitive young girl and started to resent segregation from an early age. In high school, Claudette started to learn about black history and became resentful that her constitutional right to equal protection under the law was being violated. This anger precipitated her resisting giving up her seat to a white woman. Her actions earned her many friends and enemies and inspired the black community. Had it not been for her, the energy that sparked the Montgomery bus boycott may not have existed and with it much of the energy that set off the Civil Rights movement.

The book has two major climax points, Claudette's resistance on the Montgomery bus and Claudette's testimony in Browder v. Gale. The birth of the Civil Rights movement is also a major feature of the story, but its rise and trials did not directly correlate with Claudette's. Eventually, the movement left her in the dust and she served quietly as a nurse for decades until she was rediscovered. The book covers her life in less than two hundred pages and is clearly intended for younger high school students interested in learning about the true origins of the Civil Rights movement.

More summaries and resources for teaching or studying Claudette Colvin: Twice Toward Justice.