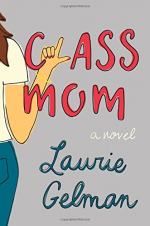 Gelman, Laurie
This Study Guide consists of approximately 37 pages of chapter summaries, quotes, character analysis, themes, and more - everything you need to sharpen your knowledge of Class Mom.

The following version of this book was used to create the guide: Gelman, Laurie. Class Mom. Henry Holt and Company, 2017.

Class Mom opens with a transcript of the all-class email that mom Jennifer Dixon sends to all parents of Miss Ward's kindergarten class in the beginning of September. Jen has been "volunteered" for this role by Nina Grandish, Jen's personal best friend -- who is also the head of the school's PTA. While Jen's son, Max, is in kindergarten, Jen also has two daughters who are in college, the product of her wild twenties, spent following around rock bands. Jen has now married her fantastic husband, Ron, and Max is their first and only child together.

As the school year begins, Jen begins preparing for an upcoming mud run with a new in-home trainer, Garth. On Curriculum Night, in mid-September, Jen and Ron meet all the other parents -- some of whom are friendly and some of whom are decidedly not. The teacher, Miss Ward, is an enigmatic presence who tends to be very short and curt with most of the parents. Jen also gets nervous and flustered to see that her high school crush, Don Burgess, is a father of a student in the class.

As autumn carries on, another of the moms, Kim Fancy, repeatedly insists to Jen that she organize a parents' cocktail party, with Kim offering to host at her gigantic mansion. When Jen arrives at the party, though, Kim is bizarrely selling expensive jewelry out of one of the rooms in her house, and many of the parents criticize Jen for this tastelessness. Jen's tenure as class mom ends just before Christmas after parents lodge complaints with the school's principal, and Asami takes over.

Asami's first task as class mom ends in disaster, as she insists on roughly brushing all the students' hair immediately before their class pictures in January, effectively ruining the pictures. When Jen goes with one of her daughters to see her daughter's boyfriend play in his local rock band, she runs into Asami, whose nephew is the band's lead singer. Jen and Asami effectively agree to a truce, and decide to be co-class moms for the rest of the year.

By the spring, Nina and Garth are now dating, having been introduced by Jen. While Jen is perfectly happy in her marriage with Ron, she has been periodically texting flirtatiously with Don, as Don repeatedly attempts to secure a coffee date with her. Jen's preparations for the mud run hit a snag when she slips getting out of the bathtub and pulls a groin muscle. One day a few weeks after her injury, Ron texts her to say that he has booked a babysitter and they will go to dinner together. As Jen begins to send steamier texts, she accidentally sends them to Don, instead of Ron. When both men arrive at the restaurant at the same time, the level-headed Ron is justifiably outraged, and it is many weeks until his anger subsides and Jen explains the situation fully.

In April, Ron's sporting goods store sponsors a mini-mud run, which Jen successfully completes alongside Garth, with many other classroom parents also participating. After the mud run, Jen runs into Kim and Miss Ward, who are unexpectedly making out. As the school year closes, Jen learns that Miss Ward had in fact followed Kim from New Jersey to Kansas City in an attempt to win Kim over from her husband, David. When Kim decides to return to New Jersey with Miss Ward, the teacher unexpectedly leaves the class with two weeks remaining in the school year. Despite Jen's protests that she will not do the same role again, she is once again the class mom for Max's first grade class.

More summaries and resources for teaching or studying Class Mom.