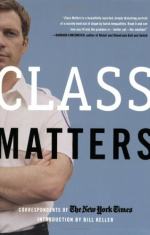 The New York Times
This Study Guide consists of approximately 36 pages of chapter summaries, quotes, character analysis, themes, and more - everything you need to sharpen your knowledge of Class Matters.

An article in the New York Times in the spring of 2005 published a series of articles on class in America and the influence that it has on one’s potential. The conclusions were that class was difficult to discern and that it can have positive and negative impact on people. While there are ostensibly opportunities for everyone to succeed, the majority of wealthy Americans inherited their wealth.

It was a team of writers and correspondents gathered by New York Times executive editor Bill Keller who did the reporting and wrote the chapters of Class Matters.

In a metaphor for class, everyone is given the same start. Like a hand of cards that represent education, income, occupation and wealth. These “cards” are the elements that define a person’s class. Starting out, a person is the same class as his parents’s...

More summaries and resources for teaching or studying Class Matters.