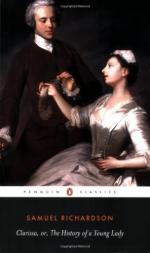 This detailed literature summary also contains Topics for Discussion and a Free Quiz on Clarissa by Samuel Richardson.

Clarissa, or the History of a Young Lady by Samuel Richardson is a novel that portrays the events leading up to the ruin of a virtuous eighteen-year-old lady. Despite her chastity being compromised, Clarissa maintains her honor by not yielding her will. She must learn to overcome the grief that attends this loss or allow it to kill her. Clarissa, or the History of a Young Lady is an epistolary, coming-of-age story, teeming with examples of friendship, betrayal, honor and pride. It displays all that is good in humanity, as well as all that it bad.

Mr. Lovelace makes his addresses to Clarissa, which is acceptable until her brother, James, returns from Scotland. At James' return, he and Mr. Lovelace duel and James is injured. Mr. Lovelace is forbidden to see Clarissa, but Lovelace convinces her to correspond with him secretly in exchange for his agreement not to avenge himself against her brother. Clarissa visits the Howes and returns to great pressure to marry Mr. Solmes. She is punished and confined for refusing Mr. Solmes' proposal. Mr. Lovelace tricks Clarissa into eloping.

Clarissa's attempts to reconcile with her family are denied, and she is devastated by their anger and resentment. She agrees to marry Mr. Lovelace once they arrive in London. In London, Mr. Lovelace conveys Clarissa to a brothel and decides to try her virtue. He attempts many contrivances to ruin Clarissa but all fail. He introduces Clarissa to his band of varlets, and his best friend, John Belford, sides with Clarissa. Miss Howe informs Clarissa of many bad rumors about Mr. Lovelace and Clarissa determines to leave him. The rumors are refuted and Clarissa changes her mind.

A fire occurs upstairs in the brothel in the middle of the night, and Mr. Lovelace makes inappropriate advances. Clarissa is very offended and escapes to Hampstead. Mr. Lovelace follows her and contrives to have two ladies impersonate members of his family and trick Clarissa back to Widow Sinclair's house. Mr. Lovelace doses Clarissa with opium and rapes her. When Clarissa regains her senses, she runs away to the Smiths' lodgings. When Widow Sinclair and the whores at the brothel find Clarissa, they have her arrested. Mr. Belford has the charges against Clarissa dropped at Mr. Lovelace's request. Clarissa becomes very ill, and Mr. Belford cultivates a friendship with Clarissa.

Clarissa believes her illness will result in her death and attempts to convince her family to give her a final blessing. The Harlowes do not believe Clarissa is ill. Mr. Lovelace's family and Miss Howe attempt to mediate between Mr. Lovelace and Clarissa to convince her to marry him, but she absolutely refuses. Clarissa names Mr. Belford her executor, and she prepares her will and plans her funeral. Miss Howe argues with the Harlowes and rages against them for the way they treat Clarissa. Colonel Morden returns to England and attempts to mediate between Clarissa and the Harlowes.

Clarissa dies and the Harlowes agree to reconciliation too late. Clarissa's friends and family mourn for her and praise her virtue. John Belford serves as executor and, with Colonel Morden's assistance, makes sure that every article of Clarissa's will is completed. Mr. Lovelace's grief at Clarissa's death translates into madness. He travels abroad for his health. Mr. Belford plans his reformation due to Clarissa's influence. Colonel Morden threatens vengeance against Mr. Lovelace for the way Clarissa was treated. The two men duel and Mr. Lovelace is killed. The characters' fates reflect the way that they treated Clarissa. Her friends are happy while her enemies are miserable or dead.