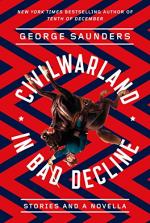 This detailed literature summary also contains Quotes and a Free Quiz on CivilWarLand in Bad Decline by George Saunders.

The following version of this book was used to create this study guide: Saunders, George. CivilWarLand in Bad Decline. New York: Random House, 2012.

“CivilWarLand in Bad Decline” takes place at a Civil War-themed amusement park. The unnamed narrator/protagonist is an employee at the park who handles various menial/managerial tasks. The park owner is a highly selfish, unscrupulous man named Mr. Alsuga. When gangs of local teenagers begin vandalizing the park, Alsuga hires a violent, unstable man named Sam as a security operative to deter the gangs. Soon, Sam begins not only attacking the gangs, but also killing them. Alsuga covers up the murders, and the protagonist remains complicit, as he needs his job in order to support his family. However, as Sam continues to kill teenagers, the protagonist eventually decides to report Sam to the police. Unfortunately, Sam kills him before he can do so.

In “Isabelle,” the narrator is a young man who lives with his brother and parents. As the African-American population of their neighborhood grows, the white neighbors’ animosity towards the black neighbors grows. One day, a police officer known as Split Lip murders a young black man. The young man is the brother of one of the narrator’s friends, so the narrator plans to kill Split Lip. However, he discovers that Split Lip is a single father raising a young, disabled daughter. One day, Split Lip dies suddenly in his sleep, and the narrator adopts Isabelle.

In “The Wavemaker Falters,” the unnamed protagonist/narrator is an employee at a water park. One day, when he is operating the controls of the park’s wavemaker machine, a young boy is killed by the wavemaker. The protagonist feels deep shame and guilt for accidentally causing the death. The boy’s ghost sometimes appears to him, and although he begs to ghost for forgiveness, the ghost always refuses. The protagonist then discovers that his wife is having an affair. The protagonist falls into a state of despair, but he eventually decides to make the most of his life in spite of these misfortunes.

In “The 400-Pound CEO,” Jeffrey is a 400-pound man who works for a pest control company. Jeffrey is mercilessly mocked by his employer and by his coworkers. The company’s owner is a man named Tim, who is very cruel and is prone to violence. The company employs illegal practices, and when a local woman discovers these practices, Tim tries to kill her so that she cannot tell anyone. Jeffrey tackles Tim in order to save the woman. However, Jeffrey then flies into a rage and kills Tim. Jeffrey tries to then take over the company and instate humane, legal practice. However, the murder is soon discovered, and Jeffrey is sentenced to 50 years in prison.

In “Offloading for Mrs. Schwartz,” the story takes place at an unknown point in the future. The unnamed protagonist/narrator manages a recreational virtual reality business. Three years ago, his wife died suddenly. He feels a persistent sense of guilt, for soon before her sudden death, he angrily yelled at her and insulted her. To help alleviate his guilt, he volunteers as a caretaker for an elderly woman named Mrs. Schwartz. When Mrs. Schwartz’s health begins to decline, it becomes clear that she needs a live-in nurse. The protagonist does not have any substantial financial savings, but he wants to be able to hire a nurse for Mrs. Schwartz. He discovers that he can sell his memories for significant sums of money, but the process erases those memories from the subject’s brain. He eventually decides to sell all of his memories for Mrs. Schwartz’s sake.

In “Downtrodden Mary’s Failed Campaign of Terror,” Mary is a 92-year-old woman who works at an educational children’s museum. Despite her age, she must work to make a living since someone stole her money after her husband’s death. Mary’s husband was a cruel man who made a living as a criminal. When Mary fell in love with another man, her husband killed that man. Her job at the museum is very difficult for her, due to her age, and her supervisor is quite mean to her. She grows resentful and sabotages an exhibit. Her supervisor discovers the sabotage and fires her. Mary then tries to kill herself by drowning herself, but some bystanders rescue her.

“Bounty” is set in the United States in a dystopian future. Various catastrophic events, potentially caused by pollution, have drastically reduced the country’s population. Also, some people began to be born with distinct physical mutations. Those people were labeled as ‘Flawed,’ and everyone else was called ‘Normal.’ The government began to discriminate against the Flaweds. At the time of the main narrative, society has experienced partial collapse, and the government has enslaved all Flawed people. The protagonist is a Flawed man named Cole; he has claws instead of feet. His sister, Connie, as a small vestigial tail. They are indentured workers at a medieval themed amusement park. One day, Connie is purchased by a wealthy visitor named Mr. Corbett. Cole, worried that Corbett will eventually sell Connie into the slave trade, escapes from the park to search for her. Along the way, he encounters various obstacles. He tries to keep his feet covered so that he will appear to be Normal. However, he is eventually identified as Flawed and is sold into slavery. He is eventually freed by an anti-slavery rebel group, after which he finds Connie and Corbett. He is surprised to find that Corbett actually loves Connie and treats her as an equal. Cole decides to leave them and join an anti-slavery rebel group.