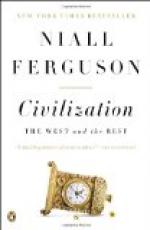 Civilization: The West and the Rest Summary & Study Guide

Niall Ferguson
This Study Guide consists of approximately 27 pages of chapter summaries, quotes, character analysis, themes, and more - everything you need to sharpen your knowledge of Civilization: The West and the Rest.

Civilization: The West and the Rest Summary & Study Guide Description

Civilization: The West and the Rest Summary & Study Guide includes comprehensive information and analysis to help you understand the book. This study guide contains the following sections:

This detailed literature summary also contains Topics for Discussion on Civilization: The West and the Rest by Niall Ferguson.

In "Civilization: The West and the Rest", popular and controversial historian Niall Ferguson sets out to explain why Western civilization, roughly understood as the set of peoples and nations that live in the earth's northern hemisphere, reaching from the U.S. through Europe, has so far exceeded the accomplishments of other civilizations in world history and in the world at present. Ferguson's thesis is that the West's dominance is due to its use of six "killer apps" or scientific, intellectual and cultural tools to increase its power, knowledge, dominance and influence. The book is divided into an introduction and conclusion, which contain six large chapters, one covering each of the "killer apps."

The first of Ferguson's killer apps is "competition." In many civilizations, a single ruling class dominated a great, enormous landmass. As a result, the political body was not competitive with others. There was for all intents and purposes an economic and political monopoly in place. The West was different for a number of reasons, but these differences manifested itself in many small nations that could compete with one another for wealth and influence, along with groups within nations competing with each other for the same. The second killer app is Western science. Because the West exceeded in scientific knowledge, basically creating modern science, it was able to gain military and economic dominance over many parts of the world.

The third killer app is private property and the rule of law and representative government. In general, we might call this app "liberal democracy" which gave the West governments that were broadly responsive to the needs and interests of citizens and protected their property so that individuals and groups could use what they earned or bought to create jobs and wealth. The fourth killer app is modern medicine, which followed scientific exploration. Modern medicine significantly extended lifespans and cured a great many diseases, allowing the West to further expand its populations and wealth.

The fifth killer app is consumption, as Ferguson celebrates the West making peace, despite its Christian origins, with purchasing and using enormous quantities of consumption goods. As a result, Western wealth grew and other nations and civilizations had to start consuming Western products due to their dominance. The final killer app is "work" which refers to the work ethic that grew out of Protestant Christianity. Because the West was willing to work hard, it was especially productive and powerful.

The conclusion of the book focuses on the West's rivals, in the form of Islamic civilization and much more importantly Chinese civilization. But Ferguson concludes that the real danger to the West is a loss of confidence in itself. Unless the West is willing to celebrate its killer apps, it will likely face gradual decline as it will not be able to adapt to forthcoming challenges, like the financial crisis that began in 2007.

More summaries and resources for teaching or studying Civilization: The West and the Rest.

Civilization: The West and the Rest from Gale. ©2005-2006 Thomson Gale, a part of the Thomson Corporation. All rights reserved.