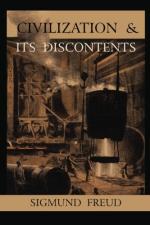 Civilization and Its Discontents Setting & Symbolism

Sigmund Freud
This Study Guide consists of approximately 11 pages of chapter summaries, quotes, character analysis, themes, and more - everything you need to sharpen your knowledge of Civilization and Its Discontents.

The ego is an individual's sense of self as a separate organism from his surroundings. Before the appearance of the ego, an infant does not distinguish between itself and the rest of the external world. This feeling of being part of the world is later covered over by the ego but does not disappear completely. It is this feeling of belonging to the world, he postulates, that makes people willing to join religious groups.

The libido is the name Freud gives to those human instincts that have external things as their objects. Sexual desire is a part of the libido, as is the general instinct toward love.

The super-ego is a part of the ego that separates and turns inwardly back toward the ego. This is the seat of an individual's conscience.The super-ego takes on the role of punisher first played...

More summaries and resources for teaching or studying Civilization and Its Discontents.

Civilization and Its Discontents from BookRags. (c)2022 BookRags, Inc. All rights reserved.