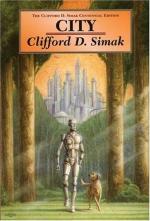 Clifford D. Simak
This Study Guide consists of approximately 49 pages of chapter summaries, quotes, character analysis, themes, and more - everything you need to sharpen your knowledge of City.

This detailed literature summary also contains Topics for Discussion and a Free Quiz on City by Clifford D. Simak.

City, by Clifford D. Simak is about the possible evolution of life on Earth, the role of violence in our society and the effects of colonizing other planets. There are eight tales told from the perspective of dogs who take over humanity's place in the world. The tales are passed down by the Dogs through the generations to the point where humans are considered mythical creatures. Eventually, other Earth creatures evolve and the world is in danger of domination by ants.

Tale one begins with the decline of cities due to hydroponic farming, better methods of communication, atomic power, transportation by helicopter, and migration to other planets. Humans live mostly in the country, abandoning once thriving cities. People also leave cities to hedge on the threat of nuclear war. In the second tale, the isolation created by living in the country living causes Tyler Webster's agoraphobia, which prevents him from helping his Martian friend Juwain. We also learn that robots, like the Websters' own Jenkins, do most of the work for man.

In tale 3, Bruce Webster alters Dogs' throats so they may talk. He also provides them with contact lenses so they can read. A census taker arrives and sees the changes to society and tells the Dogs they must be ready to take men's place if mankind fails. Meanwhile, the mutant human, Joe, helps the ants begin to evolve. Joe also takes Juwain's manuscript and finishes developing the Martian Juwain's philosophy.

Tale four and part of five take place on Jupiter. Fowler, the project leader, finds people are disappearing after being transformed into Lopers, the native creatures on Jupiter. He volunteers to be transformed himself and discovers Jupiter is a Loper paradise. Fowler comes back to Earth to spread the good news, but is blocked by Tyler Webster who knows everyone will leave for Jupiter. Joe makes a kaleidoscope that spreads the Juwain philosophy about understanding other people's points of view. This helps Fowler spread the word about the wonders of Jupiter, and most people opt to migrate to become Lopers.

Tale six opens with only 5,000 humans remaining, including Jon Webster living in Geneva. Jon visits Jenkins and the Dogs in North America and is so impressed with the Dogs' development that he decides to encapsulate Geneva so that man can not interfere with the Dogs' evolving social order. The canines continue evolving in the last two tales, living peacefully with other animals and killing is non-existent.

When Peter Webster kills a bird, Jenkins realizes that humans will never overcome their inclination towards violence, so he takes the humans that have not gone into a sleep state to a parallel cobbly world where Jenkins stays for five thousand years. When Jenkins comes back to earth he finds the ants are a threat to the world. He wakes Jon Webster and asks for advice, but Jon tells the robot to use an insecticide, so Jenkins thinks it is better to lose the world than to start killing again.

More summaries and resources for teaching or studying City.