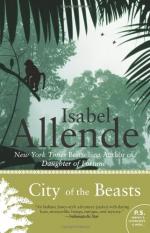 Isabel Allende
This Study Guide consists of approximately 34 pages of chapter summaries, quotes, character analysis, themes, and more - everything you need to sharpen your knowledge of City of the Beasts.

City of the Beasts Summary & Study Guide includes comprehensive information and analysis to help you understand the book. This study guide contains the following sections:

This detailed literature summary also contains Topics for Discussion and a Free Quiz on City of the Beasts by Isabel Allende.

Alex is fifteen the year his mother becomes gravely ill. When Alex's father, John, finds possible treatment for his mom in Texas, Alex and his two sisters are told they'll be sent to stay with their grandmothers. Alex's sisters will stay with their mom's mother, Clara, but Alex is to go to Kate, his dad's mother. Alex is furious with the decision, saying that Clara will cook and take care of the children, but Kate is unorthodox. Alex pleads to be allowed to stay with Clara, but John says three children will be too much for their grandmother. Despite Alex's pleas, he's sent to New York where he's to meet up with his grandmother prior to a trip to the Amazon.

Kate doesn't meet Alex at the airport and leaves him to find his way to her apartment on his own. His backpack, flute and other possessions are stolen on the way, and Alex is furious with Kate. But when he arrives, Kate says that he learned from the experience. Kate is a writer with the International Geographic magazine. Within days, Kate and Alex are part of a crew traveling into the Amazon region. The trip up the Amazon is boring. Alex hates the food available and spends a great deal of his time hungry. Things become better for him when he meets up with the guide, Cesar Santos, and the guide's daughter, Nadia. Alex and Nadia soon become friends and spend a great deal of time together.

Alex and Nadia are taken by the People of the Mist, a native tribe with the ability to fade into the scenery so efficiently that they are never seen unless they choose to be. The two young people are present when the tribe's leader dies, take on the roles of leaders with specific responsibilities, and each goes on a quest. They discover the mystical city where the beasts live, and Alex travels in search of healing waters that a shaman promises will heal Alex's mother. Nadia goes on a quest of her own.

The purpose of the trip into the Amazon is to search for a Beast that has reportedly killed several people. Also invited along on the trip is a doctor, Omayra Torres who says she plans to vaccinate the natives against measles. In truth, a wealthy entrepreneur, Mauro Carias, is hoping to eliminate an entire native tribe in the area, known as People of the Mist, in order to develop the region for mining operations. Dr. Torres is working with Carias and plans to give the natives a deadly form of the measles virus, which will almost guarantee that the entire tribe will die. When Alex and Nadia discover the plan and put a stop to the vaccinations, there's a fight and the entire crew is put in danger. They do manage to escape, and Alex pleads with Kate to write her article about the People of the Mist and their plight. Nadia, having found three large diamonds on a quest of her own, presents the gems to Alex to financially support the endeavor to save the natives.

More summaries and resources for teaching or studying City of the Beasts.

City of the Beasts from BookRags. (c)2022 BookRags, Inc. All rights reserved.