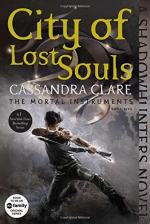 Cassandra Clare
This Study Guide consists of approximately 39 pages of chapter summaries, quotes, character analysis, themes, and more - everything you need to sharpen your knowledge of City of Lost Souls.

This detailed literature summary also contains Quotes and a Free Quiz on City of Lost Souls by Cassandra Clare.

“City of Lost Souls” is the fifth installment in the Mortal Instruments series by Cassandra Clare, and follows the efforts of Clary and Simon as they attempt to sever the bond that connects Jace and Sebastian, and stop Sebastian from starting a war between Good and Evil on Earth. When the novel begins, Clary blames herself for having left Jace alone on the roof with Sebastian. Shadowhunters around the country are on the lookout for Jace and Sebastian, bound together through an evil spell cast by Lilith through a rune. Clary, Simon, and the others know that whatever harm befalls Jace or Sebastian also hurts the other. Sebastian must be killed, but the bond must be broken before Sebastian can be killed, else Jace will also die.

Clary wants to avoid having Jace die at all costs, for Jace is her boyfriend and her one true love. One night, Jace and Sebastian arrive at the apartment of Luke, the fiancée of Clary’s mother, Jocelyn. Jace implores Clary to leave with him and Sebastian, but Luke and Jocelyn intervene. Luke is stabbed by Sebastian, who then makes his escape with Jace. She, Simon, Simon’s girlfriend Isabelle, and Isabelle’s brother, Alec, double their efforts to find a way to separate Jace and Sebastian. They decide to go and see the Seelie Queen, leader of the faeries, to see if she can help them. The Seelie Queen will help them for a price: the set of faerie rings used for telecommunication must be stolen from the New York Institute and returned to the Queen. Clary agrees to do this.

When Clary has stolen the rings, however, she decides not to give them to the Queen. Instead, she gives one to Simon to communicate with him, and goes to join Jace and Sebastian. Clary feeds Simon information about their whereabouts, and also does her best to see if she can turn Jace from Sebastian. Meanwhile, Sebastian insists that he and Jace are doing good rather than evil. He tells Clary that he and Jace are trying to shake things up because the Shadowhunters have become lazy and set in their ways. Sebastian says he and Jace are trying to lure demons onto Earth in order to destroy them like Shadowhunters are supposed to do.

Simon, Isabelle, Alec, and Alec’s boyfriend, the warlock Magnus Bane, decide that calling on the angel Raziel may help them find a way to save Jace. Simon, bearing the Mark of Cain, becomes the one to call down Raziel. Raziel agrees to give Simon the Sword of Michael the Archangel, Glorious, to sever the bond between Jace and Sebastian provided Simon gives up the Mark of Cain. Simon readily agrees.

Sebastian, meanwhile, has a version of the Mortal Cup fashioned out of adamas by Sister Magdalene of the Iron Sisters. He then has Jace kill Magdalene to cover their tracks, but not before Magdalene stabs Jace and damages the rune that binds him to Sebastian. During this time, Jace, now himself again temporarily, tells Clary all about the true evil plans he and Sebastian have. The mortal cup is to be filled with the demon blood of Lilith, to create an army of Dark Shadowhunters to take over the world. Sebastian reseals the bonding rune upon discovery of its damaging. He forces Clary to attend a ceremony where some forty disenchanted Shadowhunters drink demonic blood.

It is then that Simon, Isabelle, Magnus, Alec, and others arrive to do battle. With Glorious in hand, Clary stabs Jace, which breaks the bond between him and Sebastian. Sebastian’s unit of newly-turned Dark Shadowhunters is defeated. Jace is treated and recovers. He vows to kill Sebastian.

More summaries and resources for teaching or studying City of Lost Souls.