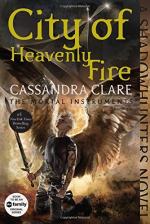 This detailed literature summary also contains Quotes and a Free Quiz on City of Heavenly Fire by Cassandra Clare.

“City of Heavenly Fire” by Cassandra Clare is the sixth installment in the Mortal Instruments series by Cassandra Clare, and follows Clare’s efforts to kill her evil brother, Sebastian, thus stopping him from destroying Earth. When the novel begins, Clary’s boyfriend Jace is attempting to relax in order to control the Heavenly Fire inside him. Clary and Jace, along with their friends Jordan, his girlfriend Maia, Simon, his girlfriend Isabelle, and Alec are stunned to learn that Sebastian has attacked six Shadowhunter Institutes around the world, including one in Los Angeles. There are handful of survivors, all children. These include Emma Carstair, and Julian Blackthorn and his younger siblings. Under such a threat, many of the Shadowhunters are evacuated to the secret dimension city of Alicante, in the land of Idris.

Sebastian sends a message to Jia Penhallow, Consul of the Grand Council, in which he says he will spare Alicante if Jace and Clary are given up to him. Meanwhile, Sebastian attacks and destroys Praetor Lupus on the North Fork of Long Island. Among the dead is Jordan. Maia is devastated. She begins to rally the wolf pack in New York to stand against Sebastian, but the wolf pack has little inclination to stand and fight alongside the Shadowhunters. They believe their leader, Luke, who is engaged to Jocelyn, Clary’s mother, is weak and ineffectual. A survivor of the Praetor massacre, Rufus Hastings, is urging everyone to abandon Luke and the Shadowhunters and to join with Sebastian. Sebastian, meanwhile, kidnaps representatives of each of the Downworlder races – Luke of the werewolves, Raphael of the vampires, Magnus of the warlocks, and Jocelyn. He intends to force them to join his side. They all refuse, and Raphael is killed for his refusal.

Maia comes to challenge Rufus for leadership in the pack, and defeats him. She then organizes the wolf pack to prepare to stand with the Shadowhunters should the need arise. She also kills Maureen Brown, rogue leader of the most powerful New York vampire coven, installing Lily as the leader in Maureen’s place. The vampires decide to ally with Maia and the werewolves, coming to realize that if they don’t all stand together against Sebastian, they will all be destroyed. A captured demon reveals plans for the forces of evil to attack Alicante the following night, so Maia sends on a warning to Jia.

Clary, Jace, Simon, Isabelle, and Alec decide to confront Sebastian. To do so, they must take a path to the demon dimension of Edom in Hell. The only accessible path lies through the Seelie Court of the Faerie People. Clary draws a portal to the Seelie Kingdom, where she and the others learn that the faeries have allied with Sebastian, and are helping him to attack Institutes across the world. Entering Edom, Clary, Jace, Simon, Isabelle, and Alec must journey across Hellish wasteland, through caves, and battle demons to arrive at a dark version of Alicante. In the Dark Gard, Sebastian confronts Clary and Jace while Simon, Isabelle, and Alec free Magnus, Luke, and Jocelyn. At the same time, the real world version of Alicante comes under attack from the Endarkened, demons, faeries, and wild faeries. Sebastian promises to spare Alicante if Clary agrees to rule Earth and Hell as his queen. Clary agrees with a kiss, but stabs Sebastian. As Sebastian dies, the evil drains from him, and he apologizes for everything he has done. Luke then destroys the Infernal Cup, which kills the Endarkened. Without them, the entire attack on Alicante falls apart and is defeated. However, Clary and everyone else are now trapped in Edom.

Magnus summons his father, Asmodeus, one of the Nine Princes of Hell. He is willing to give up his immortality for a safe return to Earth. Simon intervenes, and requests his immortality be taken away because he never wanted to be a vampire. Asmodeus also wants to take away all of Simon’s memories of his friends and girlfriend. Simon agrees to save the others. He goes back to live a normal, average human life while the others go on without him.

The faeries are punished for their scheming and violence. Jocelyn and Luke get married. Peace is returned to the world. The Blackthorn children and Emma are taken in by Uncle Arthur Blackthorn who comes to set up shop in Los Angeles to restore the Institute there. Isabelle and Clary, unable to let Simon go, seek him out in the human world. Clary confronts Simon, but Simon does not remember. Simon is then confronted by Isabelle and Magnus. Magnus uses magic to restore some of Simon’s memories, while Simon’s love for Isabelle reawakens others in him. By the end of the novel, Simon appears poised to continue recollecting his memories. He also agrees to date Isabelle to see what will come of it, and is very excited about its prospects.