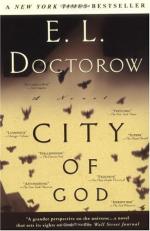 The material collected by writer Everett, the narrator in City of God, is an examination of the relationship between human beings and God, between human beings and the world around them, between human beings and one another, and between human beings and their own identity. Everett begins collecting his material because he is developing a biography of the life of Thomas Pemberton, is an Anglican priest experiencing a crisis of faith. Everett interviews Pemberton about his life, his experiences as a priest, and his evolving views of religion and Christianity. In light of the horrors of the history of humanity, Pemberton finds himself unable to believe in the stories of the Bible any longer. He is unable to believe in a God who is involved in the lives of his creation and yet still allows starvation, disease, death, or the horrors of war. As he is questioning his own faith he comes into contact with a Rabbi named Joshua Gruen and his wife Sarah, also a Rabbi, who run the Synagogue of Evolutionary Judaism. Everett then meets the couple as well and begins to write the story of Sarah’s father and his experiences during World War II. Sarah’s father, Mr. Blumenthal, was held in a Jewish ghetto for much of the war and Everett plans to write a fiction story based on his experiences. Through his contact with the Gruens, Pemberton also begins a journey in search of the stories of the Holocaust leading to an examination of his own belief system through the lens of progressive Judaism. Ultimately, Pemberton arrives at an answer to his questions and discovers the God of the Universe.

In the novel, the concept of human identity is examined through the framework of the horrors of war, historical progression, and the transformative powers of media. Through Everett’s stories about Mr. Blumenthal’s childhood in the Jewish ghetto, it is revealed the human identity is nearly indestructible. It can be transformed, altered, and harmed but it can never be entirely removed. Mr. Blumenthal loses his parents, adopts a new identity, is adopted by a new family, and finally packed into a train car like an animal. Through all of this he retains his memories of his life before the war, of his parents, and of the people who are killed around him. He retains his memories and he retains a hope for the future and for a world beyond the torture, humiliation, and death of his people at the hands of the Nazis. He is able to survive because he remembers who he is. He remembers he has been shaped by the people and circumstances of his past and present but he knows that, beyond the influence of the past and the present, there is an essential element of his identity, deep in his soul, that cannot be touched by any outside force. Human identity is shaped by the circumstances of the past, present, and future. People can be transformed by the events of their lives and even the books they read, the songs they hear, or the movies they watch. But deep within every individual is an essential part of the soul connected to the vastness of the universe. It is this essential part of the soul that holds and maintains individual identity and creates a community among all human beings.

Ultimately, Pemberton comes to the conclusion at the end of the novel the human race must be remade and in order to do that, God must be remade. He concludes God is a being, essence, or force that exists in the vast reaches of the universe within the mathematical truths of the universe. God is in the simple, elemental world of nature and can be found deep in the soul of every human being. God exists in the moral sense of human beings that dwells at their core and forms the essence of their identity. This moral sense is the part of every human being that is still connected to the beginning of time, that is still a part of the natural world, and that is untouched by the complications of human history and the cruelties of war. With a cyclical view of human history and birth, Pemberton concludes if human beings can recognize in their moral sense the God of the universe, if they can recognize their connection to one another in a universal brotherhood, then perhaps there can be a revolution in the struggle for life.