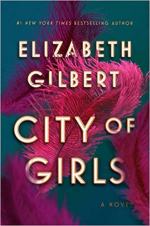 Elizabeth Gilbert
This Study Guide consists of approximately 47 pages of chapter summaries, quotes, character analysis, themes, and more - everything you need to sharpen your knowledge of City of Girls.

This detailed literature summary also contains Quotes and a Free Quiz on City of Girls by Elizabeth Gilbert.

The following version of this book was used to create this guide: Gilbert, Elizabeth. City of Girls. Riverhead Books, 2019.

Vivienne takes the reader back to the late 1930's, when she was a student at Vassar College in Poughkeepsie, New York. After failing out of her first year of college, Vivienne's parents decide to send her to live with her Aunt Peg in New York City. Vivienne arrives at Grand Central Station expecting to see her Aunt Peg, but is instead greeted by an older, curt woman whom Vivienne describes as being dressed very plainly. This woman introduces herself as Olive, Aunt Peg's secretary. She takes Vivienne to the Lily Theater in midtown Manhattan where her aunt lives and works.

At the Lily, Vivienne reunites with her Aunt Peg and meets the cast of the theater's many productions, including two showgirls named Celia and Gladys. Everyone retires to Aunt Peg's apartment above the theater to drink martinis and talk, and Vivienne is overwhelmed by the culture that surrounds her. She is particularly taken with Celia, whom she describes as the most beautiful woman she has ever seen. After drinking and getting to know one another, Aunt Peg shows Vivienne to her rooms. Vivienne is staying in a separate apartment that belongs to her Aunt Peg's former husband, Billy Buell. Aunt Peg keeps the rooms prepared for him in case he decides to return to New York from Los Angeles, where he is working as a well-known producer.

Vivienne becomes fast friends with Celia Ray and the rest of the showgirls at the Lily, and they take her under their wing when it comes to Vivienne's sexual education. After admitting that she is a virgin, Vivienne decides that she is ready to lose her virginity and enlists the help of the showgirls in finding someone right for the job. The showgirls take Vivienne to Dr. Kellogg's house -- a doctor who frequently has sex with showgirls when his wife is out of town -- and he has awkward, unexciting, unfulfilling sex with Vivienne. Afterward, she and the showgirls laugh about the experience and the fact that Dr. Kellogg is not a medical doctor but a veterinarian.

After Vivienne loses her virginity, she and Celia Ray begin going out together nearly every night after the late show at the Lily. Vivienne learns that Celia has had a rough life, having been married, divorced, pregnant, and abused at different points in her life. Now, the two women live what they see as a luxurious lifestyle, drinking and smoking late into the night and going home with men they meet while they are out. Eventually, Celia begins sleeping in Vivienne's bed with her, and the two women develop a bond that Vivienne finds comforting and exciting.

One day, two visitors come to stay at the Lily. Their names are Edna Parker Watson and her husband, Arthur Watson. They are both actors, but Edna is older and more talented than her husband by far. They have left Europe after their house was bombed during the war and have come to the United States to stay with Peg as a refuge. Vivienne is enamored by Edna, amazed at her fashion sense and the way she carries herself confidently without sacrificing her femininity. She and Edna become close as Vivienne begins using her sewing skills to make Edna's costumes for her performances at the Lily.

Later on, Billy Buell returns to town and decides that the Lily must put on a solid production that showcases Edna's talents. He writes a play called City of Girls, in which Edna will star. While watching auditions for other parts, Vivienne meets Anthony Rocella, a young actor with whom she begins her first real relationship.

Rehearsal for City of Girls continues. One night, Edna asks Anthony to escort her to a benefit. Vivienne runs into Arthur Watson and Celia, who appear to be having an affair. Arthur convinces Vivienne that Edna is trying to seduce her boyfriend, Anthony, and tells Vivienne to join him and Celia for a night on the town. Before she knows it, Vivienne is wrapped up in a blurry night of activities that ends with her, Arthur, and Celia in a hotel room together.

The next day, Vivienne arrives back at the Lily to find her Aunt Peg and Olive waiting for her. They tell her that someone has taken photos of her, Arthur, and Celia from the previous night and they are going to publish them, along with Vivienne's name, in the paper the next day. Olive drags Vivienne to the Stork Club to meet with Walter Winchell, who owns the paper. Olive convinces Winchell not to publish Vivienne's name. The next morning, Vivienne calls her brother, Walter, and asks him to help her. He arrives in New York City with a friend of his and the two men drive Vivienne back home to upstate New York. In the car, Walter berates Vivienne for what she has done and the friend he has with him calls Vivienne a "dirty little whore" (291).

Once Vivienne is home, she begins working for her father. Eventually she meets a man named Jim Larsen. The two begin dating and are eventually engaged, but Vivienne knows she does not love him. After Pearl Harbor in 1941, Jim enlists and calls off the engagement, to Vivienne's relief. One day, Aunt Peg arrives at the house and asks Vivienne to come work for her performing skits at the Navy Yard in New York City. Vivienne returns to the city with Aunt Peg and begins her work, having matured and begun living a more responsible lifestyle. It is during this time that Vivienne hears that her brother Walter has died at war.

One day, at the navy yard, Vivienne meets a man named Frank. Frank nervously introduces himself and tells Vivienne he was a friend of her brother's. Then Frank admits that he was the man in the car that day he and Walter drove Vivienne back home, and he apologizes for what he said to her. At first Vivienne walks away from him, but eventually she tracks him down and agrees to meet with him. The two begin a friendship that involves walking around New York City in the late hours of the night and talking. Frank is married, but he and Vivienne never share any physical intimacy besides touching palms on occasion. Frank has PTSD and cannot bear to be touched.

As the novel concludes, Vivienne explains that she and her friend Marjorie start a wedding stress shop together and eventually raise Marjorie's son, Nathan, together as co-parents. Vivienne continues to walk with Frank for more than twelve years. Readers discover that Angela -- the person to whom the entire novel has been addressed -- is Frank's only daughter. Vivienne meets Angela when Frank asks her to make her wedding dress. Vivienne puts special effort into the dress and feels a special connection with Angela when she meets her.

At the end of the book, Vivienne has received word from Angela that Frank has passed away and now so has his wife (Angela's mom). Vivienne notes that she loved Angela's father very much but that they never engaged in an illicit affection. She apologizes to Angela if she has hurt her by being so close to her father and offers her friendship for the future, noting that women of all ages need to stick together and support each other throughout their lives.

More summaries and resources for teaching or studying City of Girls.