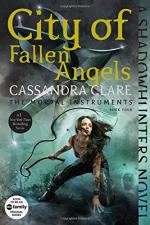 Cassandra Clare
This Study Guide consists of approximately 42 pages of chapter summaries, quotes, character analysis, themes, and more - everything you need to sharpen your knowledge of City of Fallen Angels.

This detailed literature summary also contains Quotes and a Free Quiz on City of Fallen Angels by Cassandra Clare.

“City of Fallen Angels” is the fourth installment in the Mortal Instruments series by Cassandra Clare, and follows Simon Lewis who attempts to adjust to being a vampire, and Clary as she attempts to keep her relationship with Jace steady while the demon Lilith attempts to gain power in New York. As the novel gets underway, sixteen-year-old Simon has been a vampire for two months. He is doing his best to handle his urge for blood while doing his best to live like a normal human being. This involves continuing to play bass for his band, the members of which know Simon is a vampire. Only Jordan Kyle, their new vocalist, does not know. When Simon’s mother finds out he is a vampire, she reacts horribly. He knows he cannot stay in his apartment anymore, and so goes to become roommates with Jordan.

At the same time, Simon is attempting to balance having two girlfriends-–Isabelle Lightwood, a Dayhunter, and Maia Roberts, a werewolf-–because he doesn’t want to hurt either of them by dumping one of them. At a band gig, both girls find out about the other, and both become enraged with Simon. Maia is especially enraged when she learns that Simon is roommates with her werewolf ex-boyfriend, Jordan, something which Simon did not know.

Simon, who now bears the Mark of the Wanderer, the Curse of Cain, which brings down the wrath of God against any who would harm him, is then courted by Camille Belcourt, the former leader of the most powerful New York vampire clan. Forced out by Raphael Santiago, Camille wants to destroy him and resume command of the clan. She promises to help Simon live as a vampire properly if he will join her against Raphael. Simon is given five days to make up his mind.

Simon’s best friend Clary, meanwhile, is struggling in her relationship with Jace, a Dayhunter. Jace has been having horrible dreams where he stabs and kills Clary, and so does his best to stay away from her. This hurts Clary deeply, who tries repeatedly to be near him. Only when Jace confesses the truth of his nightmares does Clary understand that some demon is tampering with Jace’s mind. She and Jace go to see the Brothers of the Silent City, who reveal some startling truths. When Clary made it possible for Jace to be brought back form the dead (in a previous novel), she upset the balance of life and death. Jace’s return from the dead meant that all protections given to him as a baby have been stripped away, and he will need new spells to protect him. His dreams are indeed the attempted influence of a demon.

That night at a party, Jace appears under the spell of the demon Lilith to draw Clary away to a condo high rise under construction. Simon is led to the high rise by Maureen, a young girl he could not resist feeding on, and whom was ultimately turned into a vampire. On the roof, Simon and Clary come to realize that Lilith intends to awaken Sebastian by having Simon feed on him long enough to revive him, and then feed him blood to strengthen him and heal him. Sebastian will then go on to create a race of powerful hybrid demons. Jace and Sebastian are bound to one another by Lilith. Harm cannot come to one without coming to the other. Jace and Lilith end up battling, but the result is inconclusive. As Lilith moves to kill Clary, Simon intervenes by putting himself in the way. As a result, God strikes Lilith dead, turning her into salt. As the novel ends, it is revealed that Sebastian now controls Jace, who feeds Sebastian his blood.

More summaries and resources for teaching or studying City of Fallen Angels.