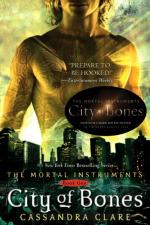 Cassandra Clare
This Study Guide consists of approximately 40 pages of chapter summaries, quotes, character analysis, themes, and more - everything you need to sharpen your knowledge of City of Bones.

This detailed literature summary also contains Topics for Discussion and a Free Quiz on City of Bones by Cassandra Clare.

Cassandra Clare's City of Bones begins an epic quest. Clary Fray is a normal teenage girl. One night however, while she is hanging out with her best friend Simon, her world gets violently turned upside down. Clary and Simon go out to the Pandemonium, an all-ages club. Clary notices an enchanting boy with blue hair and green eyes. She watches as he notices a beautiful girl come his way and watches as they acknowledge each other and he follows her to a closet. She watches as the girl and the blue-haired boy go into the closet together and see them followed by two other boys, one of whom has a knife. Clary goes to the closet and witnesses the three kill the blue-haired boy. He disappears. She realizes that no one else can see the three teens in the closet and so she claims to have imagined it. Later, she follows one of the boys outside and confronts him. She learns that he is a shadowhunter, a slayer of demons. He cannot be seen by others because he has cast a glamour to be invisible. He tells her that the fact that she can see him proves that she is no ordinary mundane girl.

Clary returns home to find the house trashed and her mother gone. She is attacked by a demon in the apartment. She manages to kill it, but not before it stings her and injects demon poison into her. Jace finds her, and takes her to the Institute, the sanctuary for shadowhunters in New York. She discovers that her mother was a shadowhunter, and that there is a magical spell cast over her to make her forget the things of fey and shadow as she sees them. She also learns that her mother belonged to a group of shadowhunter called the Circle, led by a man named Valentine. Now, Valentine has returned, and is looking for the Mortal Cup, which can turn any human who can survive the transformation into a shadowhunter. Valentine has kidnapped Clary's mom, and it seems that Clary's mom might actually be the one who hid the Cup from Valentine.

Clary and the young shadowhunters, Jace, Alec, and Isabelle embark on a quest to find the Mortal Cup before Valentine can. Her mundane friend Simon tags along, and even helps to defeat a greater demon. Simon has been in love with Clary for the last ten years, but Clary has never noticed it. When she and Jace fall in love, it devastates Simon, and creates a rift between he and Clary, who had been best friends since early childhood. In her quest to save her mother, Clary learns that Valentine is really her father, Jace is really her brother, Johnathan Christopher, and that her mom's best friend Luke is a werewolf.

Clary finds the Mortal Cup, and returns with it to the Institute. Hodge, the shadowhunters' tutor, takes the Cup, and summons Valentine, who takes the cup and Jace away. Clary and Luke lead the wolf pack on a raid of the old lunatic asylum where Valentine is hiding. Luke and Valentine do battle, but Valentine escapes through a portal to the magical land of Idris, where he has hidden the Mortal Cup. Luke takes Clary's mom to the hospital, and waits faithfully by her side while waiting for her to come out of her coma. Clary comes to terms with the fact that the guy she fell in love with is actually her brother, and that her best friend is in love with her. At the end of the novel, this story is far from over. Valentine is still out there and the young shadowhunters must now leave the investigation to the Clave.

More summaries and resources for teaching or studying City of Bones.