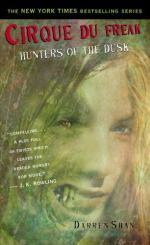 Cirque Du Freak #7: Hunters of the Dusk: Book 7 in the Saga of Darren Shan Quotes

Darren Shan
This Study Guide consists of approximately 43 pages of chapter summaries, quotes, character analysis, themes, and more - everything you need to sharpen your knowledge of Cirque Du Freak #7.

"It was the age of tragic mistakes. For me, the tragedy began fourteen years earlier when, mesmerized by a vampire's amazing performing tarantula, I stole it from him" (Prologue, p. 1).

"As a Prince I was expected to deal with every sort of subject under the moon. I was only a young, inexperienced half-vampire, who'd become a Prince more by default than merit, but the members of the clan placed their trust completely in their Princes" (Chapter 1, p. 9).

"The Stone of Blood was a magical artifact. Any vampire who came to the mountain...laid their hands on the Stone and let it absorb some of their blood. The Stone could then be used to track that vampire down" (Chapter 3, p. 20).

"They aren't honor-bound to tell the truth, they don't have to follow ancient customs - and...

More summaries and resources for teaching or studying Cirque Du Freak #7: Hunters of the Dusk: Book 7 in the Saga of Darren Shan.

Cirque Du Freak #7: Hunters of the Dusk: Book 7 in the Saga of Darren Shan from BookRags. (c)2021 BookRags, Inc. All rights reserved.