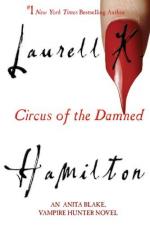 Circus of the Damned Topics for Discussion

Why did Anita think the first murder had been committed by a master vampire and his followers?

What was Jean-Claude's motivation in allowing Yasmeen to attack Anita?

Why does Anita stay at Animators, Inc. if Bert insists on making inappropriate appointments?

Do you think it could be considered rape when Jean-Claude violated Anita's mind?

Why do you think Alejandro wanted to see Oliver die?

How do you think Anita will handle Richard's admitting to being a lycanthrope?

Do you think Jean-Claude will ever forgive Anita for betraying him?

Do you believe that Alejandro's marks canceled out Jean-Claude's?