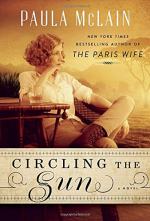 Paula McLain
This Study Guide consists of approximately 54 pages of chapter summaries, quotes, character analysis, themes, and more - everything you need to sharpen your knowledge of Circling the Sun.

This detailed literature summary also contains Quotes and a Free Quiz on Circling the Sun by Paula McLain.

Though wounded at first after her mother abandons her, Beryl Markham's tenacity allows her to overcome the challenges of being a woman in early-twentieth-century Africa. Her headstrong ways lead to failed marriages and a passionate romance, but also allows her to reach greater heights as a horse trainer and a record-breaking aviator.

Beryl's father moves the family from England to Kenya when Beryl is a small child. After a few years, her mother has had enough of Africa and moves back to England with Beryl's brother -- leaving Beryl with her father in Kenya. Beryl's father raises her with the help of the Kipsigis tribe, native Africans who share his estate. She's allowed to learn how to be a warrior with the Kip boys and how to train horses from her father. Her unconventional education leads to a love of all things wild and an understanding of nature.

As Beryl's childhood ends, however, people attempt to tame her and make her bow to conventional expectations. Everything she knows and loves becomes history. She tries, but fails, to merge the two perspectives in two disastrous marriages.

Realizing that she needs to exist in her own world, Beryl follows her own rules and becomes a horse trainer, like her father and achieves success. Her actions attract the attention of the Happy Vallley group, a drug-taking, bohemian community that lives by their own rules. Beryl rejects them and instead learns what she is really meant to do - fly! - with the help of Denys Finch Hatton, possibly the only man, other than her father, whom she truly loved.

Denys dies in an airplane crash and, partly in his memory and partly to accomplish a new challenge, Beryl contiues to fly after his death, finally becoming the first woman to fly solo across the Atlantic from east to west.

More summaries and resources for teaching or studying Circling the Sun.