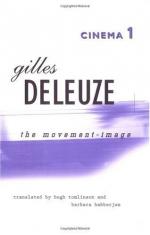 Phenomenology is the term used to describe the philosophical study of how things appear. In this work, Deleuze assumes natural perception is qualitatively different from cinematographic perception.

Privileged instants are the terms used for the regular, singular, ordinary or remarkable organized set of any-instant-whatevers that survive cutting per Eisenstein. These instants are unique to movement, as Marey and Muybridge's galloping horse, and cannot be posed or captured with a camera's long exposure.

Duration is a term used to describe consciousness which is open upon...