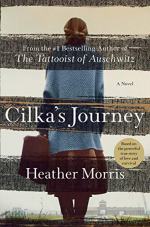 Related Topics
The Tattooist of Auschwitz
Three Sisters: A Novel

Heather Morris
This Study Guide consists of approximately 42 pages of chapter summaries, quotes, character analysis, themes, and more - everything you need to sharpen your knowledge of Cilka's Journey.

The following version of this book was used to create the guide: Morris, Heather. Cilka’s Journey. St. Martin’s Press, 2019.

The novel opens with Russian forces liberating Auschwitz concentration camp in January, 1945. Cilka, 18, and a prisoner in Auschwitz for nearly three years, is taken into Soviet custody for being a spy and sleeping with Nazis. The Soviets rule that she must serve 15 years of hard labor, and she is transported, along with other females, to the Siberian gulag Vorkuta. The women are checked in, forced to undress, and showered by fire hose. Their hair, both on their head and pubic area, is shaved, and they are forced to walk through lines of male prisoners of high rank who choose women as their property. Cilka tries to comfort Josie, a fellow inmate she met on the arduous train ride, who has not encountered this treatment before. Cilka, on the other hand, has met with this treatment, including being the target of sexual violence at the hands of the camp commanders in Auschwitz. A man named Boris chooses Cilka as his camp wife.

The first day in camp is learning the rules and sewing their prison numbers onto their clothes. On the second day the prisoners are awakened at 6am, eat gruel, and, after roll call, walk to the mines to haul buckets of coal. Cilka oscillates between knowing she can survive and the despair of 15 years of this hard labor. Josie suffers a severe burn on her hand and, at the hospital, the doctor asks Cilka, adept in many languages, to work there. Cilka eventually accepts. The novel, in one of its many flashbacks, finds Cilka as block leader of Block 25 in Auschwitz, the place where women stay the night before they are taken to the gas chambers.

Boris and other men enter the women’s hut; this begins a near-nightly rape cycle for the women prisoners. Guards looking for contraband often overturn their barracks. In the hospital Cilka quickly learns to file patient records, find medications, and to record doctor’s examination notes, and Yelena, one of the doctors; offers to teach her nursing. Cilka smuggles the uneaten hospital food to her hut-mates. One hut-mate, Hannah, uncovers Cilka’s secrets from Auschwitz and demands pain medication from the hospital for her silence. In a flashback, readers learn Cilka helped SS guards load women onto the death carts—including her own mother.

Asked by a doctor to note the time of death of a patient, Cilka notices his name is Isaac, a Jewish name, and she is determined to save him. However, officials intended the patient to die, and Cilka is fired from the hospital. Yelena arranges a job for Cilka in the maternity ward, and Cilka helps to deliver babies. She learns new mothers go back to work in the mines after four weeks but return to a childcare facility each night for two years to take care of their children. After two years, the child is sent to an orphanage, and the mother returns to the huts in the compound. The gulag is struck by typhoid, and this reminds Cilka of her sister, Magda, who died of typhoid in Auschwitz. She works with typhoid patients in the infectious ward, and then is reassigned to the regular hospital as a nurse, assisting Yelena in surgery. Yelena, a mentor to Cilka, is compassionate listener, and Cilka divulges the horrors she witnessed in Auschwitz and how she slept with the Nazis.

Cilka is reassigned to ambulance duty, and risks her life entering collapsing mine tunnels to save workers. On one run, the tunnel collapses on her and she is in the hospital as a patient. However, because one of the men she saved was an explosives expert, she is allowed to live the nurse’s barracks. She accepts the offer after Boris is to be released and other men were lining up to take her. Cilka’s excellent care of the commander’s daughter during a bone reset and appendicitis earns her a favor from the commander’s wife. She gives the favor to Josie and her daughter (born of her camp husband). Josie and two-year old Natia are released from prison.

In 1953 Cilka has been in Vorkuta Gulag for eight years; eight years of unbearably cold and dark winters and the white nights of summer. After Stalin’s death, many workers organize a labor strike, refusing to work unless living and working conditions improve. Although starting as a peaceful protest, the uprising ends in violence, and the strike is squelched.

On one ambulance run, Cilka finds the man she has harbored affection for (from a distance) over the years has been badly beaten. She tends to him in the hospital and spends her after-work hours talking with Alexandr. He is accused of smuggling information from the camp, and, after a second attempt is made on Alexandr’s life, Yelena switches his name with a patient who recently died. Cilka is called to the administrative building abruptly where her release is effective immediately. She walks out of the prison, and, upon boarding the train to Moscow, she finds Alexandr, and they ride together, both free.

More summaries and resources for teaching or studying Cilka's Journey.