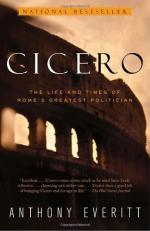 Cicero: The Life and Times of Rome's Greatest Politician Summary & Study Guide includes comprehensive information and analysis to help you understand the book. This study guide contains the following sections:

This detailed literature summary also contains Topics for Discussion and a Free Quiz on Cicero: The Life and Times of Rome's Greatest Politician by Anthony Everitt.

Cicero: The Life and Times of Rome's Greatest Politician, written by Anthony Everitt, is a biography of Marcus Tullius Cicero, the great lawyer, orator, writer, scholar and senator from the late Roman Republic. The book is highly-readable and based on an abundance of historical sources, including over nine-hundred letters that Cicero wrote, mostly to his friend Atticus, along with a number of his surviving speeches. While Cicero has been known to much of history as an important scholar and intellectual, Everitt's presentation of Cicero focuses on his political life, not his scholarly work.

However, Everitt brings out one theme that pervades both Cicero's career as a politician and as a writer and that is the preservation of the Roman Republican structure of government. As articulated in his book On the State, Cicero thought that the best government has a mixed constitution, that is, it combines the best features of monarchy, democracy and oligarchy. The Roman constitution had many complex checks and balances that evolved organically; Cicero thought they were defensible in part because they prevented any one person from gaining too much power. Throughout all of the political challenges in Cicero's life, his foremost aim was to preserve this constitution against the threat of revolution, especially from representatives of the people like Catalina and from autocracy, first against Pompey and Caesar and second against Antony and Octavian.

Everitt also focuses less on Cicero's personal life, though historians know less about it. He had a son, Marcus, and a daughter whom he loved deeply, named Tullia. When she died in childbirth, Cicero had a nervous breakdown. Cicero was married to his first wife, Terentia, for thirty years before he mysteriously divorced her. He married again briefly, but when his young wife indirectly insulted Tullia after her death, he divorced her as well.

In Everitt's view, Cicero was a great statesman because, while he desired power, he still rarely wavered from his constitutionalist principles. Only towards the end of his life was Cicero willing to use unconstitutional means to achieve his goals by trying to use Octavian to restore the republic. However, Cicero had several personal and professional flaws that prevented him from being more successful. First, while he was a spectacular orator, he lacked charisma. Second, he was nervous and insecure and easily thrown into emotional turmoil. Third, he lacked physical courage. And finally, most significantly, Cicero believed that good government came from good men; according to Everitt, he often failed to realize that good government required structural reforms. Everitt points out that Caesar realized that the Roman constitution had too many checks and balances and needed strong executive authority, but Cicero thought only about replacing bad men with good men.

Nonetheless, Everitt defends Cicero against many charges historians have lodged against him and shows that Cicero would have likely succeeded in restoring the Republic if not for several freak accidents.