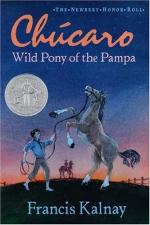 Francis Kalnay
This Study Guide consists of approximately 22 pages of chapter summaries, quotes, character analysis, themes, and more - everything you need to sharpen your knowledge of Chucaro.

This detailed literature summary also contains Topics for Discussion and a Free Quiz on Chucaro: Wild Pony of the Pampa by Francis Kalnay.

Chúcaro: Wild Pony of the Pampa is the story of a young Argentinian boy, Pedro, and a beautiful pink horse he discovered named Chúcaro. The story takes place in the Argentinian Pampa, the prairie between the Andes and the Atlantic Ocean. Most of the main characters are gauchos, basically cowboys and ranchers. They all heard and maintain livestock on an estancia, an enormous farm owned by a patrón or estanciero named Señor Muñez. Pedro's familial situation is somewhat unusual. His father, called "The Vaquero", is nearing old age and is often drunk. He has left Pedro in the care of a tall, lanky, courageous but solitary gaucho named Juan. Juan and Pedro get along well and Juan protects Pedro during difficult times.

The book opens with Pedro and the Vaquero encountering Chúcaro for the first time. Pedro is able to lasso him and he and Chúcaro form an instant bond. Chúcaro lets Pedro get close to him in ways that wild horses almost never would. The next several chapters of the book introduce the setting and various minor characters in the book. It discusses the activities of gauchos, including their modes of relaxation, which often includes drinking maté and singing gaucho songs. It covers Pedro and Juan's growing bond with Chúcaro and the bond between Chúcaro and Juan's older horse, Gitana. About a third of the way through the book, the mayordomo is introduced. The mayordomo is responsible for maintaining the estancia for its patrón. He is typically a very busy man and is eager to please his boss. He runs a tight ship and intimidates most of the gauchos, that is, except Juan.

The plot begins to take shape when the mayordomo learns of Chúcaro. It turns out that the patrón's son, Armando, has a birthday coming up and wants a horse. The patrón tells the mayordomo to find him a special horse, so when the mayordomo hears of Chúcaro, he decides to secure the pony for Armando. But Juan and Pedro are unwilling to budge. They speak with the local families about how to keep Chúcaro. They are informed that because Chúcaro was found on estancia property, it may well belong by law to Señor Muñez. So Juan and Pedro decide to offer Armando and his father a deal: if Armando can lasso Chúcaro, he can have him. But if he cannot, then Chúcaro stays with Pedro. They are sure that they can win because they have heard that Armando is a spoiled brat.

Armando, however, gladly takes the bet as he has had a lot of rancher training at his father's expense. The climax of the book comes during the match between Armando and Chúcaro. Armando can't lasso Chúcaro, and when he falls in the mud and the locals laugh at him, he throws a bola at Chúcaro, causing him to fall. When Juan sees that Chúcaro might have been hurt, he yells at Armando and shakes him. Chúcaro kicks Armando, hard. Armando blames Juan in front of his father and Señor Muñez fires him on the spot. But Juan and Pedro are not despondent. Instead, they take Gitana and Chúcaro and start on a long journey to Iguaçu Falls, something of a dream of Juan's.

More summaries and resources for teaching or studying Chucaro: Wild Pony of the Pampa.