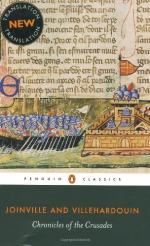 Chronicles of the Crusades Setting & Symbolism

A Crusader is one who took the cross and went on a journey for God to the Holy Land to save Jerusalem.

A seneschal is one in charge of the civil affairs of a province.

Zara is located on the Eastern shores of the Adriatic, with a capital city of Dalmatia, and is the location of the first diversion of the Fourth Crusade.

Comans are a people of Turkish decent living to the east of Wallachia in Moldavia.

Also known as the Knights of the Order of Saint John of Jerusalem, the Hospitallers are an order of military monks who defend Christianity in the East. Their name originated since the order was originally keepers of a hospital for the poor.

Turks are those of Turkish decent that are native of the Persian province.

The Tartars are people who inhabit the north-east...

Chronicles of the Crusades from BookRags. (c)2022 BookRags, Inc. All rights reserved.