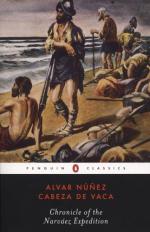 Introduction & Overview of Chronicle of the Narvaez Expedition

Álvar Núñez Cabeza de Vaca
This Study Guide consists of approximately 32 pages of chapter summaries, quotes, character analysis, themes, and more - everything you need to sharpen your knowledge of Chronicle of the Narvaez Expedition.

Chronicle of the Narvaez Expedition Summary & Study Guide includes comprehensive information and analysis to help you understand the book. This study guide contains the following sections:

The Chronicle of the Narváez Expedition (1555) is Alvar Núñez Cabeza de Vaca's account of his years as a survivor of a doomed Spanish mission, lost in what is now the southern part of the United States. The expedition landed at present-day Tampa Bay, Florida, and moved from Florida to Texas, Arizona, New Mexico, and Mexico. The Chronicle is the first published book by a European about what was to became the United States. Originally published in Spanish as La relación que dio Aluar Núñez Cabeza de Vaca de lo acaescido en las Indians en la armada donde yua por gouernador Pamphilo de Narbeaz in 1542, revised and expanded as La Relacion y comentarios del gouernador Aluar Núñez Cabeza de Vaca in 1555, the book fueled interest in exploring and conquering North America among its original readers. Cabeza de Vaca included information about gold and copper, as well as other metals and minerals in the area, objects of desire for many an explorer who followed him.

Cabeza de Vaca was a member of an expedition that left Spain in 1527 headed by Pánfilo de Narváez, who was to be the governor of what the Spanish called La Florida. Even before arriving there, the voyagers dealt with many problems, including a hurricane that sank two of its ships. At Narváez's insistence, most of the expedition party moved inland to explore and claim territory. Only Cabeza de Vaca and three others of the original crew who took the inland journey made it back to Spain alive.

The text of the Chronicle details the author's often challenging experiences as a member of the expedition. Cabeza de Vaca spent many years moving through territory not previously seen or explored by Europeans, suffering from soul-crushing hunger, thirst, and physical pain. He was among the first white men to see bison, and he writes about the many Indian tribes he encountered and lived with, their social customs, and the local land, flora, and fauna. Eventually, Cabeza de Vaca and the three other men remaining from the original expedition found other Spaniards and reached Mexico City in 1536, and they were able to return to Europe in 1537.

The Chronicle was originally written for the king of Spain as a private report in 1537. Cabeza de Vaca was trying to convince his king to name him governor of La Florida, but the position went to Hernando de Soto. The author later received his own governorship in South America in 1540. In 1542, the Chronicle was published in Spain to a limited circulation. The 1555 version of the Chronicle became more widely read. It was a more elaborate, detailed second edition, and focused on improving Cabeza de Vaca's reputation after his own governorship in South America proved a failure and landed the author in jail. The Chronicle was first translated into English in 1851 by Thomas Buckingham Smith, around the same time the United States gained territory from Mexico after the Mexican-American War.

While in many senses the expedition at the heart of the Chronicle was a failure, the book describes a triumph of perseverance. Though all of their possessions were lost and he and his companions often lacked food and water, they were able to adapt to the environment as well as many aspects of the Indian way of life. Cabeza de Vaca repeatedly emphasizes that he lived as naked as many of the Indians for much of his journey; they did what they had to do to survive. As the natural riches and native cultures Cabeza de Vaca encountered sparked the European imagination and drive to claim and conquer, the Chronicle is a critical link in the chain of events that shaped the modern North American political, social, and economic landscape.

More summaries and resources for teaching or studying Chronicle of the Narvaez Expedition.

Chronicle of the Narvaez Expedition from BookRags. (c)2021 BookRags, Inc. All rights reserved.