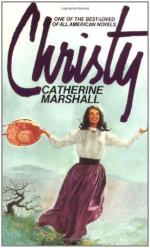 Catherine Marshall
This Study Guide consists of approximately 64 pages of chapter summaries, quotes, character analysis, themes, and more - everything you need to sharpen your knowledge of Christy.

The book, Christy, by Catherine Marshall is a fictionalized history of some of her mother's missionary experiences in the Great Smoky Mountains. Christy Huddleston is nineteen at the opening of the story, and she has made a decision to help the people of Cutter Gap as a schoolteacher. Prior to this great adventure, Christy's life is made up of tea parties, social calls, fashionable pointed shoes, and uncertainty about what her future holds for her. After listening to Dr. Ferrand speak, Christy finds the desire within herself to volunteer for an entire year, joining a community of people deep in the Smoky Mountains. The year is 1912. Christy's decision to leave her family and join a group of missionaries is a monumental life choice.

Once Christy begins her journey in January 1912, her life will never be the same. She finds herself alone in El Pano, without the greeting committee she expects. Using her powers of persuasion, she convinces the mailman, Mr. Pentland, to allow her to accompany him through seven miles of snowy, mountainous backcountry. Christy has never walked seven miles in her entire life, much less through such difficult conditions. This journey is a metaphor for what lies ahead for Christy Rudd Huddleston; one that she faces with courage and fortitude.

For Christy, life in Cutter Gap is no different than if she had gone halfway around the world. She did not understand, at first, how people can live the way the mountain people live. The lack of sanitation appalls her. Surgery done on the kitchen table shocks her. Clan disputes confuse her. However, as Christy embraces her task of being a schoolteacher to the children of the people she finds strange, she discovers a new way to see them. Through the children, she begins to be enchanted by the people, by the mountains, and by their way of life.

Christy learns how their pride and superstitions mold the people of the mountains. She sees how they handle their abject poverty with grace and acceptance. She also discovers that the people of Cutter Gap really understand life and what it means. By comparing the new Christy to her old self, she realizes that her former life was devoid of purpose. Spending a year among the people of Cutter Gap in the Smoky Mountains of Appalachia, Christy grows into a woman with a deep love and understanding of her fellow man.

More summaries and resources for teaching or studying Christy.