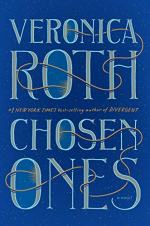 Veronica Roth
This Study Guide consists of approximately 51 pages of chapter summaries, quotes, character analysis, themes, and more - everything you need to sharpen your knowledge of Chosen Ones.

Chosen Ones Summary & Study Guide includes comprehensive information and analysis to help you understand the book. This study guide contains the following sections:

This detailed literature summary also contains Quotes and a Free Quiz on Chosen Ones by Veronica Roth.

The following version of this book was used to create this study guide: Roth, Veronica. Chosen Ones. Harcourt Publishing, 2020. Kindle.

The novel is broken into three sections. The first section begins with a map of Chicago. After, readers are presented with a transcription from a comedian’s standup routine, an academic essay on the potential origin of magic, and a magazine profile about Sloane. After these epistolary documents, the first chapter begins to be narrated by a close third-person-past on Sloane. Sloane had been taken by the government at 13 because she was identified as being a potential Chosen One in a prophecy. She and four other candidates were considered possibly fated to destroy the Dark One, but the government trained them all to use magical weapons. Sloane and her team (Matt, Ines, Esther, and Albie) had worked together to destroy the Dark One, and they had grown exceptionally close.

Ten years after their victory, Sloane and Matt lived together as a couple in Chicago. Ines and Albie lived together platonically right down the street. Esther had recently moved to California to take care of her sick mother, but the five of them spent all their free time together because no one else understood them like each other. In the first chapter, Sloane wakes up from a night terror about being kidnapped by the Dark One. Her boyfriend, the golden boy and leader of the group, comforts her and they go to sleep together.

The next morning, Sloane went to the unveiling of a monument to the Dark One’s defeat with her friends during the day, then went to a gala for the anniversary that night. Matt proposed to Sloane at the gala. She said yes, but then snuck out to a dive bar with Albie and complained that Matt did not understand her. The next morning, they all had to go to the ARIS headquarters where they learned that the government was attempting to build a machine to understand magic better since the five of them were the only ones on Earth who could use the magical instruments successfully. None of them wanted to be a part of the government’s quest to build magical weapons, so they said no, but Albie agreed to help them. The group left him alone and he accidentally used his magic to kill a bunch of agents. In response, Albie went home and overdosed intentionally, killing himself. After hearing the news, Sloane snuck out of her apartment and got her old wand, the Needle, and used it to blow up the ARIS laboratory in retaliation, then threw it in the river and went to Albie’s funeral. She held hands with Matt and Esther during the ceremony, but then heard Albie’s voice. She stepped forward, toward his voice, and then blacked out.

Part Two begins with a map of a city that looked nearly identical to Chicago but was called Cordus. Next, an elementary schoolbook excerpt is presented in which the origins of magic, which dates back to 1968, is explained to a child. Next, an academic excerpt on the Tenebris Effect, which caused magic to erupt on Genetrix, is presented. Last, we are shown a speech by a senator aiming to create haven cities where magic is outlawed.

The narrative begins and Sloane swims up to the surface of the Chicago River with Matt and Esther. A woman named Aelia introduces herself as the praetor of Cordus and says that she has brought them to a new dimension to fight an evil man called The Resurrectionist who worked with an army of the dead he raised himself. Sloane and her friends demanded to be sent back home, but they were told they must defeat The Resurrectionist first. Aelia and her second-in-command, Nero, escorted the Chosen Ones to hotel rooms at the Cordus Center. Everyone in Genetrix wore siphons that they used to perform basic magical acts such as unlocking doors. Nero began to train the Chosen Ones to use siphons. Sloane left the Cordus Center and met a man named Mox who worked as a bartender. After Esther discovered their old boss’s parallel version was alive in this world, they went to go see him, but he turned out to be different than he was on Earth. On the way back home, they stopped at Mox’s bar and Sloane flited with him. The next day, she and her friends were walking through the city when a Drain opened. The Resurrectionist kidnapped Sloane and brought her to his lair, but she escaped. Aelia explained that the previous Chosen One had fallen under the spell of The Resurrectionist, and told them that they were the fifth Chosen Ones brought from other dimensions to fight The Resurrectionists. Sloane demanded that Aelia prove the connection between the two worlds, so Aelia brought Sloane to the river and told her to dive down. She saw the remains of the Trump Tower she had blown up on Earth and her Needle. She also thought she saw the Dark One, but when she told the others they did not believe her.

In Part Three, Sloane and her friends planned to kill The Resurrectionist by using Sloane as bait. She went back to his lair, but instead of luring him out to the street like planned she climbed into the window and waited for him. When he took off his mask, she saw that he was Mox. She told him Nero and the others were coming. He told her to come with him. They rallied the undead army and went to his safehouse. When they arrived, he explained that Nero was evil and asked Sloane to come with him to Saint Louis to meet the prophet Sibyl. They took the train to the haven city where the prophet lived. Devices that muted magic surrounded the city’s border. When they arrived, the prophet confirmed that they were both Chosen and played them a recording of her prophecy which predicted the end of Genetrix. Mox explained that he had been Chosen at ten. Nero had been his teacher, but then Nero had killed Mox’s whole army and blamed it on Mox. Mox had resurrected them because he loved his friends more than anything since his parents had shipped him off to Chicago when he started displaying wild and powerful magical ability at a young age. The pair returned to the train station but were attacked by government soldiers. Sloane used her magic to escape and they stole a car. When they stopped at a motel for the night, Mox revealed that Nero had installed a spine siphon in his back which would allow him to control Mox if he got close enough. They confessed their feelings for one another and had sex. They returned to Chicago and Sloane concocted a plan to mute magic through a device in the Cordus Center so that Mox could use his magic to kill Nero without being controlled by him. When they got back to the safehouse, Mox’s best friend, Ziya, told them that the undead army had been attacked. Nero had left a pair of boots for Sloane. Sloane recognized them as the boots the Dark One had stolen for her when she was kidnapped on Earth. Nero, she finally understood, was the Dark One in disguise.

Sloane and Ziya snuck into the Cordus Center but could not access the magical device, so Sloane went to the river to retrieve the magical Needle, a wand which she had once used to brandish deadly force. Sloane was just about to return when Esther and Matt arrived. She tried to convince them Nero was the Dark One, but before she could do so he arrived with Mox in thrall to him. Sloane absorbed the Needle into her arm and looked into Nero’s eyes. She read his memories, which told her that he was an immortal creature seeking an almost impossible suicide. He had set up this whole scenario in order to infuriate Mox enough that he would be able to use all of his power and intent to kill him. Sloane steps in and does it instead, and in the process she merges Earth with Genetrix, creating a combined world that is smashed together. The novel ends on a cliffhanger, with each of the characters drifting off in a different direction.

More summaries and resources for teaching or studying Chosen Ones.

Chosen Ones from BookRags. (c)2022 BookRags, Inc. All rights reserved.