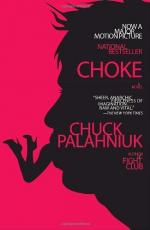 Chuck Palahniuk
This Study Guide consists of approximately 33 pages of chapter summaries, quotes, character analysis, themes, and more - everything you need to sharpen your knowledge of Choke.

This detailed literature summary also contains Topics for Discussion and a Free Quiz on Choke by Chuck Palahniuk.

Choke is a novel written by the contemporary American author Chuck Palahniuk. It tells the story of the sex obsessed Victor Mancini who pays for his mother's stay in a hospital by going to restaurants and pretending to choke on his food. In between visiting his mother, Victor reflects on his childhood and events that led him to become a self-hating sex addict.

The story begins with Victor going for to sex addiction clinic, held at a local church. Before the class begins, he has sex with fellow addict Nico in the church bathroom. The next day Victor visits his mum at St. Anthony's hospital. She is suffering from Alzheimer's disease and thinks her son is her old lawyer Fred. Victor talks to Dr. Marshall who tells him she needs a stomach tube to keep her alive. Victor goes back to work. He works at a tourist attraction with his friend Denny.

Victor and Denny visit a restaurant. Victor eats down his steak as quickly as possible and begins to choke. The idea is that the person who dislodges the food will feel so good about saving Victor's life they will forever see themselves as his guardian. Victor travels around restaurants doing the same thing, and each time the person who saves his life continues to keep in contact and even sends him money. Victor uses the money to pay for his mother's treatment. The next day Victor visits his mother. She says she has something important say, but forgets what it is.

Victor asks Denny if he can visit his mother and pretend to be him, this way she may tell him her secret. Denny agrees and after work, they set off for the hospital. Denny tells Miss Mancino he is Victor, however she refuses to say anything about her secret until the real Victor leaves. Victor walks to the other side of the ward and talks to Dr. Marshall. Dr. Marshall leads Victor to the chapel where she claims she may have a way of curing his mother, though he may not like it her method. Victor asks what it is and she takes off her clothes.

Denny tells Victor that everything he needs to know about his mother's secret is in her diary. Unfortunately, she wrote the diary in Italian. When he visits his mother again, she is rapidly going downhill. Dr. Marshall says if Victor gets her pregnant he can save his mother. She says she can inject her fetus into his mother's brain, curing any damage. Victor says he would prefer to get her diary translated from Italian into English. Dr. Marshall tells him she studied Italian for four years.

Dr. Marshall tells Victor she thinks his mother was delusional. Her diary claims Victor is the son of the Holy Trinity. Victor asks what she means and Dr. Marshall says according to the diary Victor is Jesus. She continues to say her mother stole an ancient foreskin from under a priest's bed and used it to impregnate herself. Both Victor and Dr. Marshall think his mother is insane.

Victor visits Denny. Denny is now unemployed, but he is building a wall with the huge number of rocks he has collected. Victor tells him he needs a work permit and Denny says people do not need a permit for a baby so why should I need one for a wall. A while later Victor gets a telephone call from Dr. Marshall. She tells him that she has checked the information in his mother's diary and it is all true. Victor is Jesus.

This new development in Victor's life puts him off sex as he seems to think he should now be a good person. However, he is not entirely comfortable with being a savior. He talks to Denny about the situation, saying maybe that Jesus grew into his role. While they are talking, Victor gets a call from the hospital. They tell him his mother is dying.

Victor goes to the shop to buy his mother some puddings and sets off for the hospital. At the hospital, his mother finally recognizes him as Victor. He tells her he knows her secret and everything is okay. His mother apologizes, but Victor says he is able to cope with the pressure of being Jesus. His mother looks at him strangely and tells him the secret was that she stole Victor from his pram while his real mother's back was turned. She then pretended he was her child so she could stay in America. Victor is telling her she is delusional, when she chokes on her pudding. Dr. Marshall runs in to resuscitate her, but it is too late and she dies. At this point Dr. Marshall admits she lied to Victor and she is really a patient at the hospital.

Victor goes to see Denny who is still building his wall. When he gets there, hundreds of people are chanting his name. Earlier he had appeared on television in support Denny's wall and he now realizes his mad rant had a positive impact and half of the people have come with stones to help complete the wall. Unfortunately, the other half seem to think Victor is a fake and they have come to attack him. Victor closes his eyes and Denny's wall collapses. A few hours later, everyone has disappeared apart from Denny, his girlfriend Beth and Victor. A car appears and Dr. Marshall climbs out. The four of them put together Denny's wall.

More summaries and resources for teaching or studying Choke.