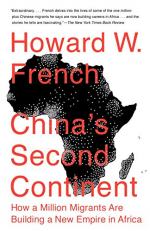 Howard W. French
This Study Guide consists of approximately 42 pages of chapter summaries, quotes, character analysis, themes, and more - everything you need to sharpen your knowledge of China's Second Continent.

“China’s Second Continent” by Howard W. French provides an account of the undeniable and irreversible presence of Chinese interests in African nations. It also depicts the impact of the millions of Chinese nationals who have immigrated to Africa to run businesses and to work as employees for the thousands of Chinese companies that have been established in Africa.

China had been quick to see the potential that Africa held out for enterprising businessmen. There was an old Chinese saying that empty things exist to be filled up. The business ventures and enterprises of Chinese businessmen were eagerly supported by the Chinese government which made generous investments in the African nations in order to foster good will. There were important drivers that created the massive Chinese emigration to African countries. China was suffering from overpopulation which threatened to present serious problems for the huge country in the not-too-distant future. China had very little land that could be devoted to farmland and they had to feed a population of three billion that only promised to increase. They needed farmland to grow food and they needed a place where some of its population could be transplanted and yet remain productive and viable citizens for the motherland.

Africa was literally bursting with natural resources. Everyone has heard about African diamonds but that was just the glittery surface of their seemingly unending assets. Buried in the African earth were mother lodes of copper, bauxite, coal, gold and ores and minerals of great variety and in great quantities. Residing above these abundant resources was more available arable farmland than was located anywhere on earth. African nations had not tapped these resources to any great extent. Most of the mining and extraction of this wealth had been led by foreign concerns typically from the West. But the West began to think of Africa as a problem it didn’t want to have despite its natural resources and great potential. Why the Africans didn't exploit their own resources is a question for the ages.

It was the perfect storm. Africa had the resources and opportunities that China wanted and space for its people and Africa was more than willing to be the recipient of the extravagant gifts offered by the Chinese that included cash, bridges, hospitals, and soccer stadiums and the promise to create modern infrastructures within the backward nations of Africa. China devoted billions of dollars to the development of their partnership with African nations and encouraged and incentivized its citizens to establish businesses there.

There was excitement and hope for the future but the honeymoon didn’t stand the test of time. Chinese employers were resistant to hiring local employees and those who they hired were underpaid and often worked under unsafe conditions. Political and social activists in Africa saw that its nation was being stripped of its natural wealth and resources for what was really a pittance. Corruption and bribes became the norm; packages with millions and even billions was generally guaranteed to turn the heads of government officials.

It is expected that within the next 25 years, there will be three billion Africans and one billion Chinese immigrants on the continent. What will that do to the West and to the balance of power that currently exists in the world? Will a country that fundamentally is in charge of two continents feel emboldened to extend their power and influence even beyond those borders? A massive military could be developed from the populace which no other country on earth could rival.

There’s a question about what country is really at the helm of Africa now. Will there be any question in the next few decades which country really controls the Dark Continent?