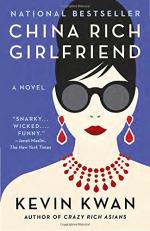 Kevin Kwan
This Study Guide consists of approximately 69 pages of chapter summaries, quotes, character analysis, themes, and more - everything you need to sharpen your knowledge of China Rich Girlfriend.

The novel China Rich Girlfriend by Kevin Kwan portrays a world of wealth and privilege unknown to most. Of the varied storylines in the novel, Astrid Teo tried to hold her marriage together even as her husband turned into a domineering and hateful man as his wealth increased. Rachel and Nick Young, meanwhile, suffer an almost lethal introduction into the lifestyle of the Baos, a family to whom Rachel had learned she is related. Finally, Kitty Tai came to realize that her reputation among the uber-rich was not as important as being able to be herself.

China Rich Girlfriend opens with a newspaper article about a terrible wreck involving a Ferrari in London. The reader learns that Carlton Bao was driving the car in which he and another girl were badly injured. His mother, Shaoyen hurried to London with her banker in order to pay hush money to ensure that it would never be learned that a third girl riding in the car was killed.

During the trip to London, Shaoyen met Eleanor Young, the mother of Nick Young. When Eleanor saw a picture of Carlton, she hired a private investigator because Carlton looked so much like Rachel Chu, the girl to whom her son was engaged. Although Eleanor had not approved of Rachel, she became more accepting of her when she learned that Rachel was the daughter of Bao Gaoliang, a wealthy politician in China.

After their wedding, Rachel and Nick went to China to get to know Rachel’s family. Because Shaoyen felt threatened by Rachel, she refused to meet her, a situation that resulted in Rachel and Nick spending a good deal of time with Carlton and Colette. At one point, Colette heard Gaoliang suggesting that he might cut Carlton out of his will in favor of Rachel. Colette’s anger incited her personal assistant to poison Rachel and threaten her to stay away from China. Colette claimed not to have had any role in the poisoning and begged for Rachel’s forgiveness. In the same conversation, Colette got angry with Rachel and called her names when she would not try to persuade Carlton to start dating Colette again.

Meanwhile, Astrid and Michael Teo appeared to have a perfect marriage. Astrid, however, was covering up her unhappiness because her husband had changed after he began acquiring his own wealth. Michael was critical of Astrid, blaming her and her style choices when a business deal he was counting on fell apart. Astrid left Michael after he got it into his head that Astrid’s father had bought the first company the Michael sold, a transaction that Michael believed would have meant the money was given to him out of pity. Astrid knew her father had not purchased the company, it was instead purchased by her ex-boyfriend, Charlie Wu, who wanted Michael and Astrid’s marriage to work.

In a third storyline included in the novel, former soap opera star Kitty Pong, also known as Katherine Tai, was approached by Corinna Ko-Tung, a self-styled consultant for social climbers. Corinna met Kitty after a disastrous event in which Kitty’s friend had her membership at the highly exclusive Locke Club revoked after she invited Kitty there for lunch. Corinna used the incident to help Kitty understand how bad her social reputation was. Kitty agreed to work with Corinna to repair her image, but Corinna’s demands made Kitty feel as if she was not being true to herself.

Corinna joined Kitty on a trip to visit Bernard, Kitty’s husband, and her young daughter Gisele. When Corinna learned how Bernard had Gisele on a strict regimen of study and therapy, she suggested to Kitty that she needed to get her daughter away from Bernard if she wanted her to have a normal life. Kitty took Corinna’s advice to the extreme and kidnapped Gisele from her father. Even though Corinna warns Kitty that the act of kidnapping will set her reputation back immensely, Kitty does not seem to care any longer.