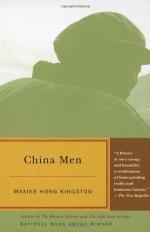 Plot Summary
+Chapters Summary and Analysis
On Discovery
On Fathers
The Father from China
The Ghostmate
The Great Grandfather of the Sandalwood Mountains
On Mortality
On Mortality Again
The Grandfather of the Sierra Nevada Mountains
The Laws
Alaska China Men
The Making of More Americans
The Wild Man of the Green Swamp
The Adventures of Lo Bun Sun
The American Father
The Li Sao: An Elegy
The Brother in Vietnam
The Hundred-Year-Old Man
On Listening
Free Quiz
Characters
Objects/Places
Social Sensitivity
Techniques
Themes
Style
Quotes
Topics for Discussion
Literary Precedents
Copyright Information
Order our China Men Study Guide

Maxine Hong Kingston
This Study Guide consists of approximately 61 pages of chapter summaries, quotes, character analysis, themes, and more - everything you need to sharpen your knowledge of China Men.

The text is presented as a biography of the author's male relatives and covers four generations, including a great grandfather, grandfather, and the author's father. It also describes the experiences of the author's siblings, particularly one brother, who served in the United States of America's Navy during the Viet Nam conflict. The text is divided into chapters, which are largely presented in chronological order. However, there are notable exceptions. Major chapters are separated by very short chapters, which present brief vignettes derived from Chinese folklore or other relevant but disparate sources. These concise chapters have themes, which, in general, complement the subsequent biographical chapters and serve as extended allegory.

The text contains a fair amount of autobiographical material, which is interspersed with biographical information. The text is additionally complicated by the lack of many elements traditionally considered fundamental to biographical treatments, and the inclusion of many elements traditionally considered appropriate only for works of fiction. Dates are vague. Events happen during a broadly specified period of time only, or dates are presented as a suite of possibilities. Textual chronology is not particularly discernable beyond major historic events. Family relationships are not specified and periodically appear to be contradictory. Finally, fictional or fictionalized events are interspersed with factual events without, in most cases, noting what is factual and what is probably not. The biographical nature of the text is, therefore, open to interpretation and speculation. This approach to biography is simultaneously difficult yet engaging and makes the book particularly interesting to read and consider.

The basic biographical elements of the text include the presentation of the voyages between China and the United States of America, including pre-Statehood Hawaii, of the author's male relatives. Most of the family information centers on the experiences of the men as laborers in America, and how their Chinese heritage influenced their decisions and treatment. The author's relatives participated in many of the most important historical events of American history and yet they are not widely remembered. Their anonymity as Chinese laborers is counterbalanced against their fundamental role in the successful development of the author's extended immigrant family of Chinese Americans.

More summaries and resources for teaching or studying China Men.