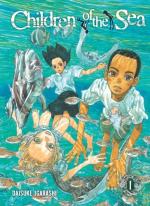 Children of the Sea Essay

Hart comments on the influence of Haiti on Danticat's fiction, mentioning "Children of the Sea."

More than anything else, the storytelling of the young Haitian-American writer Edwidge Danticat has given the world honest and loving portraits of Haitian people, both on the island and in the United States. She has smashed the numbing stereotypes created by a barrage of media accounts of Haitian poverty, misery and death.

Danticat's debut novel, Breath, Eyes, Memory, garnered international acclaim last year. In her new book, a collection of nine short stories called Krik? Krak!, she draws on her experience growing up in dictatorial Haiti as well as stories of Creole culture and myth.

Danticat, 26, a teller of stories in the truest sense, takes us heart-pounding into a breathtaking Haiti, whose culture and people are so often diminished, even disfigured, in the writings of those who do not know and love...