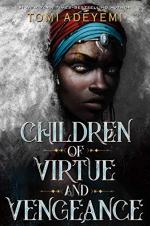 Children of Virtue and Vengeance Characters

Tomi Adeyemi
This Study Guide consists of approximately 56 pages of chapter summaries, quotes, character analysis, themes, and more - everything you need to sharpen your knowledge of Children of Virtue and Vengeance.

Zelie is a rash and impulsive teenage girl. Her magic makes her a part of the Reaper clan. She cares deeply about the people she loves, and she hates her enemies just as passionately. When she was a child, her mother was killed in the Raid. Ever since then, Zelie has been angry with the world and resentful of the monarchy.

As a maji without any powers, she faced persecution and hatred. She was forced to join work camps and was taxed unfairly just because of her ancestry. In the first novel in the series, she embarks upon a wild mission to bring back magic to the maji, thinking it will save the world, but she is devastated when she realizes that the monarchy has gained magic as well, turning into powerful titans who can wield outrageous amounts of power.

Adding to her sorrow at failing to change...

More summaries and resources for teaching or studying Children of Virtue and Vengeance.

Children of Virtue and Vengeance from BookRags. (c)2022 BookRags, Inc. All rights reserved.