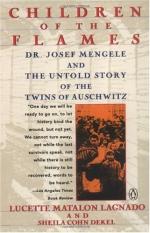 Children of the Flames: Dr. Josef Mengele and the Untold Story of the Twins of Auschwitz - Chapter 6, The Story of Andreas Summary & Analysis

Chapter 6, The Story of Andreas Summary and Analysis

In The Story of Andreas, Mengele wrote a fictional novel many years after the war that told the story of a war fugitive and his escape from Germany. It has been established that this fictional novel is a thinly veiled autobiographical tale of Mengele's life after the war. Mengele's character was called Andreas.

Three years after the war, Irene began to push Mengele to give her a divorce. Mengele refused, insisting that they could make it work in time. Mengele insisted that Irene come with him when he decided to leave Germany. Again Irene refused, determined instead to return to her own hometown.

Mengele traveled without harassment from Germany to Switzerland where he planned to take a boat to South America. Mengele was assisted by a family friend who provided Mengele with money...

(read more from the Chapter 6, The Story of Andreas Summary)

Children of the Flames: Dr. Josef Mengele and the Untold Story of the Twins of Auschwitz from BookRags. (c)2023 BookRags, Inc. All rights reserved.