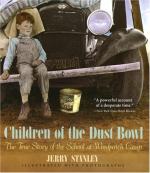 Children of the Dust Bowl: The True Story of the School at Weedpatch Camp Setting & Symbolism

The majority of farmhands, known as Okies, who left Oklahoma for California for work, lived in the northwest region of the state known as the Oklahoma Panhandle.

The Dust Bowl was a region of the United States that was hit by drought and unrelenting winds. making it a next to unbearable place to live. The Dust Bowl encompassed the area in the "Panhandle near Goodwell, Oklahoma to the western half of Kansas, the eastern half of Colorado, the northeastern portion of New Mexico, and northern Texas" (p. 5).

Many California farmers sent handbills to the beleaguered Dust Bowl area offering jobs and the possibility of a bright future for those languishing in the region. California was thought of in mythic terms by the Dust Bowl farmers. There was food and jobs for all and no one ever got sick there.

Children of the Dust Bowl: The True Story of the School at Weedpatch Camp from BookRags. (c)2022 BookRags, Inc. All rights reserved.