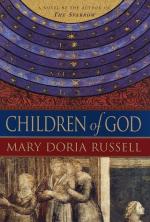 Mary Doria Russell
This Study Guide consists of approximately 78 pages of chapter summaries, quotes, character analysis, themes, and more - everything you need to sharpen your knowledge of Children of God.

Children of God: A Novel Summary & Study Guide includes comprehensive information and analysis to help you understand the book. This study guide contains the following sections:

This detailed literature summary also contains Topics for Discussion and a Free Quiz on Children of God: A Novel by Mary Doria Russell.

Children of God takes up the story of Emilio Sandoz as he heals from the ordeal that he suffers in Mary Doria Russell's first novel, The Sparrow. Emilio is shanghaied back to the planet Rakhat, where he had been mutilated and gang raped, because this serves the interests of Vatican and Jesuits. On Rakhat, he sees that the political situation has changed and he moves to ward off the extinction of the formerly dominant and tyrannical species.

Children of God follows Emilio Sandoz, a linguist and former Jesuit priest as he helps train a second mission to the planet Rakhat, where he had been mutilated and raped. The Vatican and the Jesuits desire this, and, when he refuses, they kidnap him. He leaves behind a beloved fiancée and her daughter and has to be sedated for much of the long flight. Towards the end of the voyage, Emilio emerges as the group leader, insisting that they learn from him every detail that might help ensure their survival and prevent a second tragedy. The time frame of this strand is 2060-62 on Earth and 2062-78 aboard the spacecraft Giordano Bruno.

Intertwined with this is the story of Sofia Mendes Quinn, the lone survivor of the mission of the Stella Maris still on Rakhat. She knows nothing about Emilio's torments or escape home (and he knows nothing about her). Sofia's story stretches from 2047 through 2078, when the Bruno arrives and the two story strands blend. Having inspired the Runa population to resist the Jana'ata, who breed, enslave, and consume them, Sofia hides in the Trucha Sai wilderness for the better part of forty years. Her autistic son Isaac wanders off in search of peace and music and Sofia hardens into a political leader. The Runa push the Jana'ata northward and bring them to the point of extinction. During this period, a revolution occurs among the royal Jana'ata that promises a more egalitarian state. The leaders of the two sides tragically both die in battle, leaving a power vacuum filled by civil war and famine. Some refuges in the N'Jarr Valley manage a life of peace among the species.

The Bruno mission arrives, expecting the status quo of forty years earlier to apply, and is appalled that the musical species will die out. They establish a reservation system for the Jana'ata and a strict prohibition of the eating of Runa flesh, hoping that in time an integrated society can evolve. Most of the Jesuits remain on Rakhat, but Emilio returns to Earth with a gifted Jana'ata musician who is prepared to share the mystery of God's Music with humankind. Emilio finds himself at last at peace with all that has befallen him.

More summaries and resources for teaching or studying Children of God: A Novel.

Children of God: A Novel from BookRags. (c)2021 BookRags, Inc. All rights reserved.