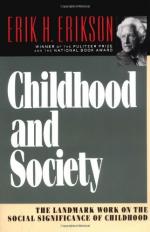 This detailed literature summary also contains Topics for Discussion on Childhood and Society by Erik Erikson.

Childhood and Society is a landmark study and theory of childhood development that attempts to combine the methodology of Freudian psychoanalysis and cultural anthropology in order to generate a psychology of child development. Erik Erikson (1902 - 1994), a Danish-German-American psychologist and one of the most important psychologists of the twentieth century, wrote Childhood and Society in 1950 after extensive contact with Anna Freud, the daughter of Sigmund Freud, receiving training in psychoanalysis, observing Native American tribes from a psychological perspective and operating both a public and private practice.

Erikson's focus on child development led him to develop eight psychosexual stages of child development, extending on Freud's original five stages. Erikson argues that each child must navigate these eight stages in order to fully develop. He also defends Freud's controversial notion of the genital stage in adolescence, where children become not only acquainted with their genitals, but do so under a psychological-symbolic aspect, one that represents control over their world.

Erikson is well known for developing a detailed theory of ego psychology and argues that the ego serves to balance the Freudian Id and Superego rather than often being dominated by the Id. Erikson argued that the environment a child is reared in is critical in generating proper growth, adjustment, self-awareness and identity.

Among Erikson's most important theories, as mentioned, is his theory of psychosocial development. Each of the eight stages consists in a contrast between two psychological states which correspond to successful and unsuccessful development in the stage. For example, in infancy (0 to 1 year), trust and mistrust are the relevant contrast, whereas in preschool (4 - 6), initiative and guilt form the relevant contrast. In infancy, the child's major question is whether its world is supportive and predictable; whereas in preschool, the main question is whether the child is good or bad.

Childhood and Society contains over 400 pages of text and is divided into four broad parts, Childhood and the Modalities of Social Life, Childhood in Two American Indian Tribes, The Growth of the Ego, and Youth and the Evolution of Identity. The first part examines early childhood stages of development and develops a theory of how childhood development is related to social development.

Part II contains Erikson's observations of two Native American tribes along with his psychoanalysis of some individuals in the tribes. Part III focuses on Erikson's notion of the ego (built on Freud's) and its development, and Part IV discusses the evolution of personal identity, covering Erikson's theory of national development as seen in the United States, Germany and Russia. Each part contains several chapters, with two chapters in both parts one and two, three chapters in part three and four in part four.