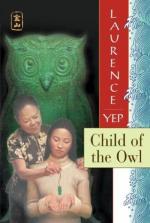 Laurence Yep
This Study Guide consists of approximately 32 pages of chapter summaries, quotes, character analysis, themes, and more - everything you need to sharpen your knowledge of Child of the Owl.

This detailed literature summary also contains Topics for Discussion and a Free Quiz on Child of the Owl: Golden Mountain Chronicles: 1965 by Laurence Yep.

The novel CHILD OF THE OWL is the story of twelve-year-old Casey, a Chinese-American girl learning to accept her cultural heritage while living in Chinatown with her grandmother, Paw-Paw. At the opening of the novel, Casey lives in San Francisco with her father, Barney. Barney is hospitalized at the opening of the novel after being mugged outside the bookie's after winning a large sum of money on a horse racing bet. Because of Barney's hospitalization, Casey is first sent to live with her Uncle Phil in the wealthy part of town, and then with her grandmother, Paw-Paw in Chinatown. While living with Uncle Phil, Casey feels worthless, since her uncle and his family are only concerned with money and appearances; they do not allow Casey to live independently or have her own opinion on anything. When she proves to be too much of a hassle for Uncle Phil, who worries that Casey is a bad influence on his daughters, Annette and Pam-Pam, he arranges for Casey to move in with his mother in Chinatown.

Just driving through Chinatown, Casey begins to feel uncomfortable. She has never been around so many Asian people in her life, even though she herself is Chinese. She sees that her skin color is the same as the rest of the people in town, which makes her feel like she should know something about her culture, history, and language. She is embarrassed that she doesn't, and has always associated herself just with being American. All this begins to change when Casey meets Paw-Paw, an old Chinese woman steeped in Chinese history and mythology. She tells Casey that she is a Child of the Owl, and shows her a necklace that symbolizes the mythological history of their family, which stems from a single owl that sacrificed herself for the safety of her family, and descended to earth in human form. Because of this history, all women in their family are doomed to feel lonely and isolated, but there is hope; the women are also determined, smart, and will eventually return to the sky. Initially, Casey just feels the isolation and loneliness. School in Chinatown is a disaster because Casey has no friends and is bullied by students and teachers alike for her inability to speak or write Chinese.

Throughout her time in Chinatown, Casey investigates her family history and learns that her father's gambling addiction is far worse than they thought. When Paw-Paw's necklace is stolen during the night, and Paw-Paw is hospitalized after her attempt to fight-off the burglar, Casey's mission changes from discovering more about her past to returning the owl necklace to its rightful home. Casey is shocked to learn, then, that it had not been Gilbert, the greasy teenager with money to burn, who had stolen Paw-Paw's necklace, but Barney himself. Casey realizes that she no longer belongs with Barney, and that Chinatown is her home. She is not Barney's child any longer, but is a Child of the Wwl.

More summaries and resources for teaching or studying Child of the Owl: Golden Mountain Chronicles: 1965.