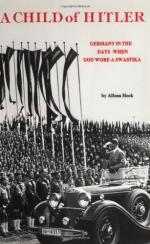 Child of Hitler: Germany in the Days When God Wore a Swastika Summary & Study Guide

Child of Hitler: Germany in the Days When God Wore a Swastika Summary & Study Guide Description

Child of Hitler: Germany in the Days When God Wore a Swastika Summary & Study Guide includes comprehensive information and analysis to help you understand the book. This study guide contains the following sections:

This detailed literature summary also contains Topics for Discussion and a Free Quiz on Child of Hitler: Germany in the Days When God Wore a Swastika by Alfons Heck.

A Child of Hitler: Germany in the Days when God Wore a Swastika is the reconstructed autobiography of Alfons Heck's experience as a heavily indoctrinated and ultimately high-ranking leader in the Hitler Youth from the beginning of the Nazi Regime to its demise. Heck later went on to speak publicly about his experience under the Nazi Regime and persistently maintains that despite the evil of Hitler's regime, he had nothing but absolute adoration for Hitler until the very end of the war. The book as a whole shows the incredible power of the Nazi youth propaganda machine.

Alfons Heck was born in 1928 in the Rhineland in Wittlich, Germany. At age 6, he entered elementary school just as the Nazi Party was coming to power. While his parents were anti-Nazi, Alfons's stubborn and powerful grandmother had managed to browbeat his mother into letting her and Alfons's grandfather raise him as their own. As a result, there was little to keep him out of the Hitler Youth. When Heck was ten he and some friends, along with other classmates, joined up with the Hitler Youth, that at the time had 5 million members. Half of his classmates met their end during World War II. Heck was not promoted much until he was fourteen, yet all the while he was being indoctrinated to love Hitler and serve the German state. He believed that he and his country had a bright future ahead.

At age fourteen, Hitler Youth members were forced to join the Hitlerjugend, or the Hitler Youth's senior branch. Heck wanted to avoid becoming a foot soldier, so he attempted to gain entry into the Flieger Hitlerjugend, or the elite Flying Hitler Youth. This required year-long glider training. While surviving the savage rule of his commanding officer, Alfons made a number of friends that he would later promote to high-ranking positions in the Hitler Youth leadership. Further, while Alfons grew up wanting to become a priest, after a year he wanted nothing more than to be a fighter pilot in the Luftwaffe. Glider training from 1942 to 1944 was the happiest period of Heck's life.

By age 16, Heck received his Aeronaut's Certificate in Sailplane Flying, but the Allies had made so much progress in France that his 180-member class, which Heck now led, were forced to go to Wittlich to set up anti-tank barriers behind the Nazi Westwall. Due to extreme losses in the battlefield, Heck quickly rose in rank, reaching Bannfuhrer, where Heck led 3000 Hitler Youth in Bann (a district) 223. Heck was responsible for a number of anti-aircraft cannons and ordered Hitler Youth to fight American soldiers.

Heck loved the power despite being desperate to be called back to the Luftwaffe to fly. He finally returned to the Luftwaffe base at age 17 but flight training was suspended. A Luftwaffe officer trying to protect Heck ordered him to get a troop to retried radar equipment near Wittlich and then go on furlough there for four days. Heck was still a devoted Nazi, but his aunt and a young girl helped convince him to don civilian clothes so that the coming American army would not kill him. Largely unaware that Heck was a member of the Hitler Youth, the Americans allowed Alfons to serve as an interpreter until the French came to govern the area. Heck was then arrested and did a month or hard labor, then lived on two-year restriction to his town. For a long time, Heck was unable to believe what his country had done or to be angry with Hitler, but as his life progressed the guilt and horror of his experiences set in.