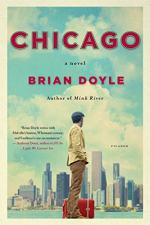 Doyle, Brian
This Study Guide consists of approximately 36 pages of chapter summaries, quotes, character analysis, themes, and more - everything you need to sharpen your knowledge of Chicago.

This detailed literature summary also contains Quotes and a Free Quiz on Chicago: A Novel by Doyle, Brian.

The novel begins around the year 1980. The protagonist—whose name is never stated—is a Caucasian male who moves to Chicago after graduating from college. He moves into an apartment building on Chicago’s north side, near Lake Michigan. The building is owned by a semi-reclusive Greek immigrant called Ms. Elminides. The superintendent is Mr. Pawlowsky, who shares his apartment with a dog named Edward. Edward appears to have the intelligence of a human. The protagonist quickly becomes friends with Edward and Pawlowsky. The protagonist works as a reporter for a Catholic newspaper, and he spends much of his free time exploring the city.

The protagonist begins to suspect that Pawlowsky and Elminides may have romance feelings for one another, but he refrains from trying to force a spark of romance between them. One day, the protagonist discovers a homeless man whom Elminides is allowing to temporarily live in the basement. The protagonist agrees to keep the man’s presence a secret. Edward has a deep and consistent fascination with Abraham Lincoln, and Pawlowsky states his belief that Edward may be over 100 years old and may have once been the companion of Abraham Lincoln. The protagonist does not doubt the possibility of this claim.

One day, Elminides receives several pieces of mail from the city stating that there are unpaid property taxes on the apartment building. This is strange, as the building’s expenses are usually covered by a fund in a Greek bank account set up by Elminides’ grandfather before his death. An investigation reveals that a man named Giannis stole all of the money and fled to Turkey. The residents quickly rally to help Elminides pay the back taxes. They eventually help to cover all of the debts. One major way in which they do so is by playing successful bets on the Kentucky Derby, thanks to the betting acumen of elderly resident Mr. McGinty.

The protagonist continues his explorations of the city and eventually comes in contact with the city’s homosexual community. Although the protagonist is heterosexual, he finds this community to be highly interesting. One day, the protagonist meets a young woman on a subway train, and they form an acquaintanceship. (The narration never states the woman’s name.) As the spark of romance begins to form between them, the woman moves to Boston to accept a job offer. The protagonist ponders the idea of moving to Boston to be with her. Pawlowsky eventually asks Elminides on a date, and they soon form a romantic relationship. The protagonist decides to move to Boston. Approximately 15 months after he first arrived in Chicago, he says his bittersweet goodbyes to his friends before leaving Chicago to live in Boston.

More summaries and resources for teaching or studying Chicago: A Novel.