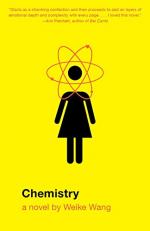 Wang, Weike
This Study Guide consists of approximately 44 pages of chapter summaries, quotes, character analysis, themes, and more - everything you need to sharpen your knowledge of Chemistry.

This detailed literature summary also contains Quotes and a Free Quiz on Chemistry: A Novel by Wang, Weike.

The following version of this book was used to create this guide: Wang, Weike. Chemistry: A Novel. New York: Alfred A. Knopf, 2017.

Told through the first-person perspective of its protagonist, an unnamed Chinese-American graduate student, the novel opens with the protagonist's boyfriend, Eric, proposing to her. The narrator evidently does not give a definite answer, as she then relates a conversation with her lab mate, who advises her to make a list of the pros and cons of accepting the proposal. The narrator lists many pros and no cons. Flashbacks, used pervasively throughout the novel which is written entirely in the present tense, relate the history of the narrator's relationship with Eric. They have been living together for two years, and have a dog. Eric has finished his PhD and is looking for academic jobs in places like Ohio; the narrator is still working on her PhD in Boston, where the novel is set, and no longer feels very interested in it. She also struggles with feelings of inadequacy. Her research project is going nowhere, she only has one publication, and misogynistic attitudes toward women in science -- such as a colleague's statement that women "lack the balls" to do it (11) -- haunt her.

The narrator describes Eric's family, who are white and from Appalachia, as overwhelmingly and vocally loving and supportive. Her family is very different. She is the only child of two immigrants from China: her Shanghainese mother, who grows up being complimented for her beauty, and her father, who grows up a studious young man on a farm far from Shanghai. His studies and engineering career lead the family to Michigan after the narrator is born. The narrator, who physically resembles her father, describes the pressure she feels to live up to both her father's academic achievements and her mother's physical desirability. Both objectives seem hopeless to her. Her parents apparently do not have a happy marriage: when Eric asks the narrator what about accepting his proposal she is afraid of, she cites their relationship.

One day in the lab, the narrator removes her coat, and then smashes five beakers on the floor. Disturbed by her outburst, her colleagues call the safety officer, and she is removed from campus. At home, the narrator reflects further on her parents' lives. Her mother, a pharmacist in China, hates life in Michigan. She resents her husband and spends most of her time calling relatives in her home country. Her very limited English keeps her from continuing her career in the United States. The narrator remembers her parents fighting nightly, her father breaking things in his frustration.

The narrator is placed on medical leave from graduate school. She begins working as a tutor and is advised to a psychologist, which she reluctantly does upon Eric's urging. She is determined not to let her parents find out about this, or about her leave of absence. Meanwhile, she and Eric try to develop their relationship, which is hampered by what Eric calls the narrator's "ten-inch-thick bulletproof glass" (45). They go on a date to the Museum of Science; the narrator remains emotionally detached. She continues to reflect on her Chinese-American identity, noting that she can communicate little in Chinese, but that even in English, "Eric says that he can still tell I am not a native speaker" (54).

After some time on leave, she decides to quit the PhD program. When she delivers this news over the phone to her mother, her mother is enraged, declaring, "You are nothing to me without that degree" (62). Wracked with guilt, the narrator decides to call them back and say she changed her mind "if I am ever to sleep again" (65). At the prompting of her psychologist, referred to as "the shrink," the narrator thinks about her memories of her mother. At points, her mother blocks her father's car in the driveway or cuts all the house's phone lines in fits of spite. She knows that if she follows Eric to Ohio, she will become like her mother, who has followed her husband to the United States and is "never happy" (71).

The narrator's best friend, a doctor living in New York City, becomes pregnant. The two women decide they hope the baby will become a model, "someone beautiful and famous but not necessarily very smart" (75). To help further this end, the narrator advises her best friend to dress before a mirror in front of her baby. Meanwhile, the narrator is officially informed that she has been expelled from graduate school. She remembers how her father drilled her constantly in math when she was growing up. While tutoring her own students, she is asked to provide more positive encouragement, so she works to incorporate this into her lessons, though it does not come naturally to her.

Eric and the narrator are displaced from their apartment when the ceiling caves in. Staying at an inn, they rekindle their passion. Then, Eric begins to get job offers. He asks the narrator to come with him to Oberlin, Ohio, and all she can say is, "I want to" (99). She remembers her mother asking for a divorce and her father refusing. Eric, not receiving the answer he seeks, finally breaks up with the narrator with the statement, "Some time apart wouldn't be the worst" (102).

After Eric moves to Ohio, the narrator continues to tutor more students, including one, referred to only as "the math student," (113), who has a girlfriend pursuing her scientific studies in Antarctica. Her parents continue to pressure her to finish her PhD, not knowing that she no longer intends to do so. She has ongoing conversations about this with her psychologist, who urges her to "move on" from her feelings of failure surrounding her academic career. The narrator relates being bullied in school because she was the only Asian in her class, then times when her mother would pick her up from the dreaded school, take her to an amusement park, then drop her off at home and leave for a week, apparently with the initial intention not to return.

The best friend's baby is born. The narrator enjoys helping her take care of the newborn. Continuing to miss and occasionally call Eric, she drives to New Hampshire, where they would go leaf peeping, and stays in a motel. She remembers Eric telling her, "Your mother is a terrible person," after she tells him the story of her mother abandoning her and her father and going to a motel (130). The narrator attempts to defend her mother to Eric, but has trouble finding the words. She recalls Eric correcting her mother's English when visiting her family, and her anger when he claims, "If she lives here, she is expected to speak the language" (136). Eric apologizes; the narrator cannot forgive him, even though she admits to herself that she has thought the same thing. The narrator recalls to the psychologist her mother's experience upon receiving word that her relatives in China have passed away. The family cannot make it back to China in time for the funeral; when they finally arrive, the grief-stricken mother wishes she could remain. The psychologist asks why the narrator defends her mother; the narrator replies, "I still want her to be happy" (144). She recalls how her father would not let her play as a child, but insisted that she spend her time studying math. As she grows older, he urges her to manage her money perfectly so that her children will not be poor. While watching a cooking show in which a blue-haired Chinese-American chef is applauded by the judges for her rebellion against her parents, the adult narrator is angry about how outsiders perceive her upbringing.

Meanwhile, the best friend is struggling to balance taking care of her newborn with working as a doctor. She receives little help from her constantly absent husband, who, she finds out, is cheating on her with his secretary. Enraged, she tells him to disappear from her life. The best friend brings her baby to stay with the narrator, while faulting the secretary for having an advantage over her due to the secretary's physical beauty. Both women agree that their lives are made more difficult by the expectation that they be both smart and beautiful. The narrator enjoys spending time with her best friend and the baby, and begins to spend time with the math student outside of lessons. He breaks up with his girlfriend in Antarctica, and the two begin dating. The narrator has developed platonic relationships with other students, too, who keep in touch with her after they graduate to tell her of ways in which they are reminded of her.

The narrator begins to look back on her history with both her parents and Eric more positively. She notes that in Chinese, the phrase for the love between family members is literally translated as "I hurt for you" (190). She acknowledges the ways in which her parents made sacrifices for her, expressing familial love in their own way by renovating their suburban house together in order to create a suitable home for their family. The narrator expresses her love for her best friend by buying her an aluminum heart paperweight. The best friend, who has decided to reconcile with her husband, draws strength and composure from bringing the heart to counseling sessions. The narrator discovers online that Eric is in a new relationship with a woman who is "both good-looking and brilliant," yet is able to move on (205). The novel ends with her inviting him to visit her in Boston again, "just as a friend" (211).

More summaries and resources for teaching or studying Chemistry: A Novel.